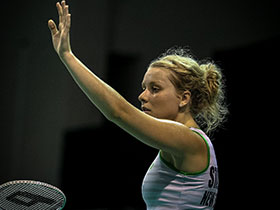 Current and former Waikato University students make up five of the eight places in New Zealand’s badminton team heading to the Commonwealth Games in Scotland in July.

It’s a young team, with men’s singles player and Waikato alumnus Joe Wu the oldest in the side at 28. Madeline Stapleton, who is competing in the women’s doubles is the youngest at 21 years old. The Sir Edmund Hillary scholar completed her Bachelor of Social Sciences at Waikato last year. For her, it’s been a two-year journey to qualify for Glasgow, “but we know there’s more to do of course”.

Sixth in the world

The New Zealand team is currently ranked sixth in the world.

Singles player Michael Fowke, who studied engineering at Waikato and is currently New Zealand player of the year, says he’s been trying to gain selection for a couple of years, competing in international tournaments. The former Hillary scholar says it’s been a big investment, but one that’s obviously paid off with the valuable exposure to world class players.

Alumnus Joe Wu competed at the games in Delhi in 2010. He’s currently playing his provincial badminton for Northland.

In the blood: Oliver Lleydon-Davis will team up with his sister and fellow management student Susannah at the Glasgow games.

Oliver Lleydon Davis, 23, will be playing mixed doubles with his sister. He and Susannah are both studying for a Bachelor of Management Studies, but Oliver has taken time out from study recently to concentrate on his sport.

It’s not the first time he’s been to the games either. “It’s still a big weight off the shoulders to see my name on paper,” says Oliver. “The hard work starts now.” He’ll also be playing in the men’s doubles.

The team is aiming for a seeding inside the top eight.

Waikato University high performance student manager Greg O’Carroll says the selection of the five players is a tribute to the significant hard work that they have all maintained over the years. “I’ve worked with these athletes over the past few years so I'm extremely thrilled for them all.

“Four of the five players were or are Sir Edmund Hillary scholars so hopefully this is also a strong reflection of the values of the Hillary programme. These students are a classic example to other Waikato athletes and Hillary scholars of where application and commitment can lead people.

Mr O’Carroll says he’s also very pleased for TJ Weistra who has had a significant role in the development of the players, and who is a good friend of the Hillary Scholarship programme.

The New Zealand team will be under the guidance of new national coach, Svend Sorensen from Denmark.