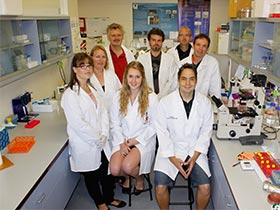 Preventing breast cancer, reducing the toxicity of radiotherapy and chemotherapy side effects, and analysing memory function during anaesthesia, were the topics for three students from the University of Waikato, who have just completed summer studentships.

Laura Bell, Kirsty Mayall and Stephen Evans were each awarded a Waikato Clinical School Summer Studentship worth $5000. Laura and Kirsty are about to embark on their second year of a Master of Science (MSc), while Stephen is in his first year of a PhD. All three students are focusing on biomedical science and will each take their studentship research topic to the next level throughout 2014, as part of their degree.

“Selenium (Se) is an essential trace mineral that has critical roles in maintaining health in humans. Depending on the concentration and type of selenium, it can cause or prevent breast cancer,” says Kirsty.

The aim of this study is to test two different types of selenium at three concentrations each in human breast cancer cells that carry the BRCA1 mutation (an inherited breast and ovarian cancer gene).

“During my MSc I’ll be looking at the different concentrations of selenium on the breast cancer cell lines and what dose is lethal for the cells. From there we’ll investigate what dose is most effective at reducing the levels of DNA damage present in the cells.”

Reducing toxicity of radiotherapy and chemotherapy

His study will also focus on selenium, but instead of cancer prevention, he will look at reducing the negative effects of cancer treatment.

“High doses of selenium have been shown to reduce chemotherapy and radiotherapy-induced toxicities towards blood forming stem cells in both animal and human studies. My project examines the effects of selenium on the growth of such cells when they are exposed to these toxic cancer treatments,” says Stephen.

Laura Bell was originally inspired to study biology by her Year 12 Hillcrest High School science teacher. Her research focuses on the effects of general anaesthetics on a patient’s memory and is supervised by Dr Peters alongside Dr Logan Voss from the Anaesthesia Department at Waikato Hospital.

“The mechanism by which anaesthetics disrupt memory is not well understood, but is likely to involve an interruption to gene expression and protein synthesis pathways,” says Laura.

Laura explains that previous studies have focused on the effect of anaesthetics in the hippocampal area of the brain. However, the cerebral cortex is also an important site for memory and this is the area that she will be investigating.

The projects provide further collaborative research links between staff from the University of Waikato and Waikato Hospital, which Dr Peters says is exciting for the development of biomedical science research at the University.