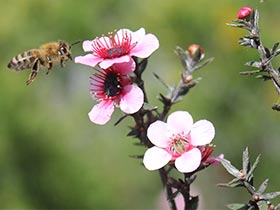 Image courtesy of Graeme Platt: The results of a University of Waikato study surveying the flowers of mānuka trees has been published in the Journal of Agricultural and Food Chemistry.

The results of a University of Waikato study surveying the flowers of mānuka trees around the North Island has been published in the Journal of Agricultural and Food Chemistry.

The research conducted by the University of Waikato honey chemistry team was led by Associate Professor Merilyn Manley-Harris.

“Mānuka honey contains bioactivity that originates from a chemical called dihydroxyacetone (DHA) in the nectar of the mānuka flower. However not all mānuka trees produce the same amounts of DHA and therefore mānuka trees are not necessarily equal in their ability to create bioactive honey,” says Assoc Prof Manley-Harris.

Surveying the flowers of mānuka trees

The Waikato honey team spent the past few years surveying the flowers of mānuka trees around the North Island and testing their nectar for DHA.

Throughout the study the team classified the nectars as high, medium or low based upon the quantity of DHA in the nectar. Variations from low, to moderate or high were observed between years for the same trees in some locations and differences between regions in the North Island were also observed. “Perhaps most significantly trees within a 100 metre radius in one location showed variation from low to high.”

An Australian species related to mānuka was also sampled from northern New South Wales. These species also displayed DHA in their nectar, in some cases at high levels.

Assoc Prof Manley-Harris says that surprisingly, some garden cultivars originating from New Zealand displayed extremely high levels of DHA which were significantly (two to three times) higher than most trees found in the wild. Cultivars which displayed red, single flowers were most likely to show this behaviour.

“It should be possible to grow mānuka plantations to support the supply of bioactive honey, but it is also necessary to understand the genetics and physiology of DHA production in the tree and why it shows this particular trait. Once we know the underlying genetic component, physiology and how external factors impact on the production of DHA, we may then be able to control the variability of this molecule in plantation mānuka. Until that point it is a case of planting and hoping.”