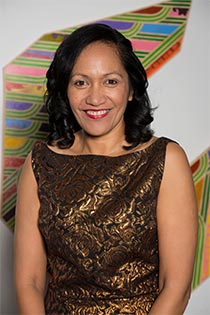 Waikato-Tainui Chief Executive Parekawhia McLean has been recognised for her impact on public policy and the public sector with a University of Waikato Distinguished Alumni Award.

After leaving Waikato, Ms McLean began a career in public service in Wellington where she worked in a number of agencies, including the Ministry of Māori Development, Women’s Affairs, the Ministry for the Environment, the State Services Commission, Te Puni Kokiri and the Department of Prime Minister and Cabinet.

Ms McLean was a strategic advisor to three of New Zealand’s Prime Ministers – Jenny Shipley, Helen Clark, and current University of Waikato Chancellor Jim Bolger. She also had two stints in ministers’ offices, with the Honourable Sir Douglas Kidd in the 1990s and with the late Honourable Parekura Horomia in 2001.

Back in the Waikato

Ms McLean is currently part of the group overseeing the development of a Waikato regional economic strategy, and has recently become a director of Te Pūtahitanga o Te Waipoumanu – the whānau ora commissioning entity for the South Island.

She is also a former director of Mighty River Power and former board member of Te Māngai Pāho (the Māori Broadcasting Agency) and Te Wānanga o Aotearoa.

University of Waikato Vice-Chancellor Professor Roy Crawford says the University is proud to be presenting Ms McLean with a Distinguished Alumni Award. “Her contributions to public policy are a reflection of her outstanding commitment to her community, and we are delighted to be honouring her success.”

Ms McLean credits the support of her whanau for her career success. “I am humbled and honoured to receive this award on behalf of my whanau and many others who have supported me over the years. Without them I would not be the person I am today or have achieved what I have.”

The University of Waikato’s Distinguished Alumni Awards for 2014 were presented on 19 September at the Gallagher Academy of Performing Arts.

The Distinguished Alumni Awards celebrate and honour University of Waikato alumni who have made outstanding contributions in their careers and communities, taking into account excellence in the professional, cultural, creative and voluntary sectors.