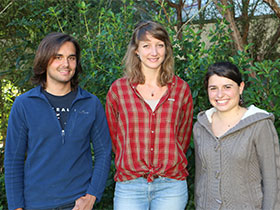 French biology students: Left to right, Miguel Riviere, Solène Knipping and Manon Lelarge each travelled to the Waikato to undertake internships with the University of Waikato’s School of Science.

Solène Knipping, Manon Lelarge and Miguel Riviere each travelled to the Waikato to undertake internships with the University of Waikato’s School of Science. The trio’s research will credit towards their respective masters degrees in France.

Solène Knipping is studying at Ecole Normale Supérieure de Lyon in France. Here at Waikato University, she is working with Antarctic researcher Dr Ian Hogg, looking at the relationship between the genetic diversity of terrestrial (land-based) springtails and the Antarctic landscape. Springtails are small insect-like animals and, at less than 2mm, are the largest year-round animal species living on the Antarctic continent. They live only in ice-free areas, which makes their available habitats very isolated and patchy. This research focuses on predicting the response of Antarctica’s terrestrial habitats to global climate changes.

“The style of study here in New Zealand is not the same as in France. There is much less pressure and stress. People here are also nice and relaxed, and there are wonderful landscapes to enjoy,” says Solène.

Miguel Riviere is from Normandy in the north-west of France. He has recently finished the first year of a forestry masters at AgroParisTech, Paris Institute for Life sciences.

“Between the first and second year of the masters degree, we have the opportunity to take a gap year, during which we can choose to study, volunteer or do an internship in other countries in exchange for a Certificate of International Experience,” says Miguel.

Miguel chose to complete an internship at Waikato University, under the supervision of plant ecologist Dr Daniel Laughlin.

“The first two months of my internship involved helping with field work in urban parks throughout New Plymouth and Hamilton, as part of an urban forest restoration study, and collecting samples around Nelson, Golden Bay and Waikato for a project aimed at assessing the evolution of tree traits along a climate gradient throughout New Zealand native forests.”

The second part of his internship has consisted of two mini-projects included in the trait/climate project. One is to process and carry out a statistical analysis of data, and the second is to design an experiment on leaf decomposition.

Manon Lelarge is studying towards a masters degree in eastern France at AgroSup Dijon, an institute that specialises in agriculture and the environment.

“I’ve always dreamed of visiting New Zealand and, because I’m working in the area of sustainable development and ecology, I think it was the best place for me to come,” says Manon.

Her research here is with plant biologist Dr Michael Clearwater, and has included working on kiwifruit infected by PSA, as well as helping a PhD student with her field work on urban forest restoration. “It’s been great as I’ve spent time in the Taranaki and Waikato regions.”

Her main project consists of measuring the drought tolerance of a number of New Zealand’s unusual native conifers including collecting samples from Tongariro National Park, processing them in the laboratory and combining her results with those that have already been collected. “The results will help us understand why some of these trees prefer growing in harsh, cold and boggy sites, and how they might respond as the climate changes.”

All three of the students chose New Zealand over the rest of the English-speaking world for very similar reasons. New Zealand as a whole was chosen for the cultural and outdoor experiences, and the amazing ecosystems the country offers. They chose the University of Waikato for the strength of research put out by their respective supervisors and for the great central North Island location Hamilton offers for exploring.