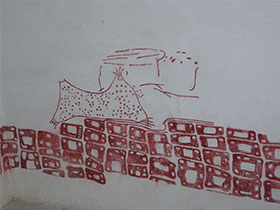 Ancient mural: A reconstruction of the mural which was excavated in Çatalhöyük

A University of Waikato Earth scientist has played a significant role in a study which suggests a ~8600 year old excavated Turkish wall painting is the world’s earliest representation of an active volcano.

Dr Martin Danišík of the Faculty of Science & Engineering is the second author of the recently published PLoS ONE research paper, led by Professor Axel K Schmitt from the University of California, Los Angeles (UCLA).

“According to a widely cited interpretation the mural found in Çatalhöyük settlement in Central Anatolia, Turkey, depicts an explosive summit eruption of the Hasan Dağ twin-peaks volcano located 130km northeast of Çatalhöyük, and a birds-eye view of a town plan in the foreground, which often in textbooks is referred to as the world's oldest map,” says Dr Danišík.

“This interpretation, however, has remained controversial, because until now independent evidence for a volcanic eruption during the time of Çatalhöyük settlement has been lacking. To test this hypothesis, we collected samples from the summit of Hasan Dağ where we hoped to find the youngest rocks erupted from the volcano.” 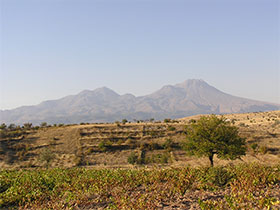 The authors applied a novel dating technique to zircon crystals found in the volcanic rock, using cutting-edge analytical facilities available at the University of Waikato and UCLA. The tests revealed one of the youngest eruption ages ever measured on zircon crystals.

The collected zircons eruption dates were also found to overlap with the age of the mural. This proves that humans could indeed have witnessed an exploding Hasan Dağ and depicted it in a painting.

The surprisingly young eruption age also points to the fact that Hasan Dağ is much more active than previously thought and does pose a potential natural hazard in the area.

“Dating such young zircons is analytically extremely challenging, so in this case we really pushed the limits of the analytical techniques. It’s also encouraging to know that here at Waikato University we now have a methodology that allows us to date many volcanic records that could not have been dated before. This is of great importance for New Zealand and global applications.”