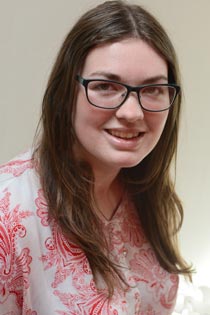 Creating change: Kate Lunn is one of the three Waikato University students on the Hamilton Youth Council.

Kate Lunn (LLB) and William Lewis (LLB/BSocSc) return for another term, while Kayla Liddington (BMS) has been appointed to the Youth Council for the first time.

The students were selected for their active involvement in the youth sector, and will provide advice to council on key issues affecting youth in Hamilton. They will also play a key role in monitoring the effectiveness of the Youth Action Plan.

Kate, William, and Kayla join seven other young Hamiltonians on the panel, and will be supported by Councillor Margaret Forsyth as the Council representative.

Kate, currently undertaking her second year of study, says that the youth council provides a great opportunity to engage with the city leaders.

“Hamilton has one of the youngest populations in the country, and we pride ourselves on being a student-friendly city. The youth council ensures that issues concerning young people are heard and that changes can be made when needed.

A remarkable year for Hamilton

Kate was originally appointed onto the youth council in 2012, and says she’s pleased that Hamilton City Council developed the role of the group this year to have a greater focus on policy.

“The changes made to the youth council means that we can have a greater input during the development stage of policies, rather than merely submitting on them once drafts have already been produced.

“This year is such a remarkable year for Hamilton, with the city turning 150 years old and the university turning 50. It’s a great time to be involved and be able to contribute to the future of the city.”

The Youth Council will meet bi-monthly throughout the three-year Council term.