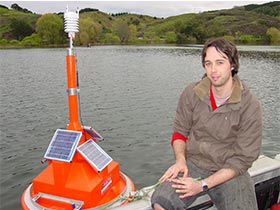 Web-accessible water monitoring stations that provide real-time data for the management and restoration of lakes are creating a stir internationally.

University of Waikato Advanced Technical Officer Chris McBride has overseen these devices from design through to implementation as part of his role with the Lake Ecosystem Restoration New Zealand (LERNZ) group.

It is this work which has seen Chris nominated as a finalist in the 2014 KuDos Science Excellence Awards, for the Hill Laboratories Laboratory Technician Award.

“My role begins with using and developing hardware and software tools for collecting and analysing ‘big data’ on lakes. We process and apply the data for research aimed at managing and restoring water quality, as well as studying global patterns and long-term change through the GLEON network,” says Chris.

In addition to installing buoys in the Rotorua Lakes and around New Zealand, he has also made several trips to China where he deployed a system to help monitor Taihu, a lake four times the size of Lake Taupo but only a few metres deep and with severe algae blooms.

Data from buoys is also highly useful for improving numerical models of water quality, and Chris has worked with the model DYRESM-CAEDYM to evaluate lake management options such as the Ohau Channel diversion wall and land-use change in the Rotorua Lakes.

Chris completed a Master of Science at the University of Waikato in 2005. “I was offered a three month contract by Professor David Hamilton straight out of my MSc and here I am nine years later, still enjoying the work.”

Professor Hamilton is the Bay of Plenty Regional Council Chair in Lakes Management and Restoration, and leads the Water Quality Group for LERNZ.

While working full-time, Chris is about to undertake a PhD, following on from his research to date.

The KuDos Awards were launched in 2007 to celebrate science in the region. Additional finalists from the University of Waikato this year include Associate Professor Nicola Starkey for the Gallagher Medical Science Award , Professor Craig Cary for the Environmental Science Award and Dudley Bell, who joins Chris as a finalist for the Hill Laboratories Laboratory Technician Award. This year’s winners will be announced at an awards dinner on 9 October.