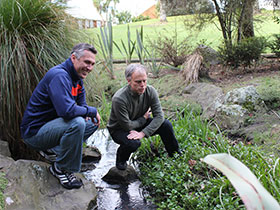 University of Waikato researchers are leading a project examining freshwater food gathering areas and how best to manage them through the use of both science and mātauranga Māori.

The research project – which features on the University of Waikato stand at Fieldays – will consider what role mahinga kai, referred to in the Waikato-Tainui rohe as hauanga kai, could have in representing the state of our fresh water resources. It will also consider whether using mātauranga Māori alongside Western science could enhance the credibility and acceptability of limits set on using those resources and the best way to communicate research results from hapū level to a national level.

Hudson says they are working closely with the Waikato-Tainui College of Research and Development which is advising on local knowledge of hauanga kai. The project also brings together people form Massey University, NIWA, Manaaki Whenua Landcare Research and the Waikato Regional Council.

“Initially we have been getting everyone on the same page to ensure we are all heading in the same direction,” he says.

While the ultimate result would be cleaner water, Collier says that won’t happen with the study.

“It’s the process of how people can work together to make use of different knowledge from science and mātauranga Māori to inform limit-setting around hauanga kai that we’re interested in,” he says.

Template for studies on other waterways

The main study area in the first year of the project will be on the lower Waikato River where there are lakes, wetlands, rivers, streams and estuaries that provide a variety of contrasting habitats and species.

Hudson says the increase in co-governance models for waterways, including the Waikato River, has seen an increased need for the inclusion of both Western science and mātauranga Māori in the process of setting achievable objectives and enduring outcomes for freshwater management.

“We expect over time there will be more instances of co-management and we aim to show how mātauranga Māori and science can be used together to inform those decision-makers.”

Collier says the process which will come out of the study will be able to be used as a template for studies on other waterways.

”We will get an understanding of the limits required to sustain hauanga kai. We will be able to say ‘this worked in these habitats and for these species’ to provide a starting point for conversations elsewhere.”

Water study gets flowing is licensed under a Creative Commons Attribution 4.0 International License.