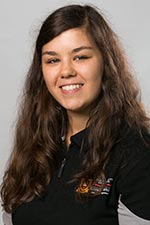 Raising the bar: Weightlifter Rachel Curran is one of this year’s new Hillary scholars.

Gone are the days where lifting weights was seen as a ‘guy thing’, but weightlifter Rachel Curran is putting that to the test.

She has already become a champion after having spent less than two years in the sport, and it’s her success that has landed her a Sir Edmund Hillary Scholarship from the University of Waikato.

As a Sir Edmund Hillary scholar, Rachel will have all her course fees covered, receive specialist coaching and mentoring and take part in personal development and leadership programmes.

Getting involved in weightlifting

The former Birkenhead College student became involved in weightlifting through her PE teacher at high school.

“My PE teacher was a professional athlete in the discipline of pole vault and had a fair amount of involvement with the high performance coaches at The Millennium Institute of Sport and Health. She suggested to my parents that I would be suited to weightlifting and put them in contact with weightlifting coaches at the institute.”

Rachel has competed in a number of competitions, and is currently the North Island champion and the Secondary School National champion in her weight division.

She says the challenging thing about the sport is not beating others, but beating herself and staying motivated when the going gets tough.

“Weightlifting is a very individual sport. I love the sense of achievement and the adrenaline rush that comes from lifting a weight you haven’t lifted before.

“It’s difficult maintaining motivation when your body is sore and there has been little notable improvement. It’s a little frustrating until you see the results in competition which just motivates me to train harder for the next competition.”

Rachel is studying a Bachelor of Science at Waikato University, with a long term goal of becoming a paediatrician. In terms of her sport, she has her sights set on big things.

“I hope to represent New Zealand in various Trans-Tasman clashes in Australia and also qualify for the 2018 Commonwealth Games.”

The Sir Edmund Hillary Scholarship programme is the most prestigious scholarship on offer at Waikato University. It’s awarded to students who are high academic achievers and who are also achieving in the arts or sports.