Home from the UN and plenty to think about 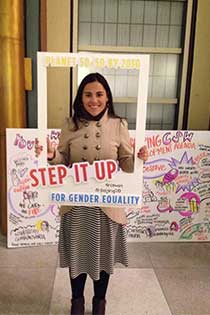 Kimberley Kilgour joined thousands of worldwide representatives at the United Nations' Commission on the Status of Women in New York.

Home from a "whirlwind" trip to New York to attend the United Nations' Commission on the Status of Women (CSW59), Kimberley Kilgour says she's heartened by the strides being made towards gender equality, but there's still a long way to go.

Kimberley raised nearly $6000 to attend this year's conference after being selected by YWCA Aotearoa to represent New Zealand.

Every year all UN member states and civil society (non-government) organisations meet in New York to evaluate progress on gender equality initiatives. This year's meeting was a 20-year review of the Beijing Declaration and Platform for Action. The Declaration identifies 12 areas of concern including those that are particularly relevant to New Zealand – eliminating all forms of violence against women and closing the gender pay gap.

Kimberley joined more than 4400 civil society participants at CSW59 and says things are looking positive for the future of gender equality.

"Although we haven't fully achieved the targets set out in Beijing 20 years ago, I'm thankful that nationally and internationally we're still on the journey towards conquering the 12 areas of concern outlined in the declaration," she says.

The fight for equality

Kimberley was most affected by the parts of the conference that focused specifically on discrimination against indigenous women.

"It was heart-wrenching to hear some of the atrocities indigenous women continue to face, but amazing to hear of their strength in continuing to fight for equality in the face of so much oppression in their home countries.

"I'd like to see Māori women represented at CSW in the future too. Out of more than 200 side events on offer, not one of them profiled Māori women and some of the successes New Zealand has had in recognising the rights of our indigenous women."

Kimberley also found the time to fundraise for her South-Sudanese roommate after hearing of her struggle to pay for education in Sudan.  "It was something I really struggled to understand – not being able to have access to education," she says. "I didn't just want to stand by and do nothing, so I pledged to support her and over three days there were enough pledges to pay for her first semester at university."

Before going to New York, Kimberley had dreams of one day working at the UN but says that's on hold to pursue community-level change instead.

"I know that if I want to make a real impact in my community, it will be at the grass-roots level," she says. "The experience and confidence I gained participating in CSW59 is going to help me interact with my community better than before."

There was time to take in the sights in New York, where Kimberley's "touristy highlight" was walking across the Brooklyn Bridge. "I also got to take part in a gender equality march on International Women's Day. That was chaotic and exciting as they shut down some of the roads for the march which went from the UN to Times Square."