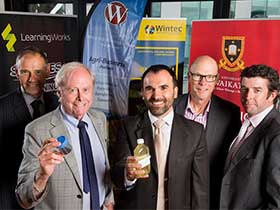 Hamilton-based Ligar, the developer of molecularly imprinted polymers (MIPs) for purification and extraction, today announced it has secured an initial investment of hundreds of thousands of dollars from Wallace Corporation.

Ligar's revolutionary technology solves a growing need for many industries to be able to extract both valuable and undesirable substances, whether those products are consumable liquids, dissolved minerals, water or ingredients used in manufacturing.

Ligar is a spin-out company based on a partnership between WaikatoLink Limited, the commercialisation and technology transfer company of the University of Waikato, and Wintec's subsidiary LearningWorks, which is commercialising Wintec's world-leading research on molecularly imprinted polymers.

Ligar has already successfully used its specially designed molecules to remove agrochemicals and smoke taint from wine; and is now investigating food and beverage purification and metal extraction.  The company will use the new funds from Wallace Corporation to scale up the organisation and start a range of industrial trials with the aim of going to market with products later this year.

"We first became interested in Ligar's technology due to its potential to recover chromium used to tan hides, which makes good financial and environmental sense.  We quickly saw that Ligar's novel technology had commercial potential in a wide range of areas so we invested in the whole business.  This investment is the second investment in a WaikatoLink spinout company in as many years."

"They really value science-based innovation as part of their overall company strategy.  Ligar is a fantastic example of the value that can be created by publicly funded research organisations and we're very excited about its potential."

"We have identified a number of high potential market opportunities with industry partners around the globe, so the Wallace Corporation investment is very timely."

He says one of the biggest opportunities is the extraction of high value substances from food and beverages and the removal of unwanted chemicals and contaminants.

"Wine is a good example; the Australian state of Victoria lost $100 million in 2009 alone due to smoke taint in wine caused by bushfires.  Over the last few years that figure would total close to half a billion dollars, and that's just one contaminant in one part of the world."

Metal recovery from industrial processes is another area being investigated he says.

"Currently 20 per cent of the chromium used in the tanning process is lost and ends up in the landfill.  We can recover that chromium so it can be reused which not only has a financial payback, it also has some real benefits for the environment.  This is particularly so in countries where tanneries don't dispose of pollutants effectively and it ends up in rivers."

The technology can also be applied to heavy metals contamination in food and water.  The removal of arsenic from water used in production processes is another area the company is keen to investigate.

According to Slaughter, one of the highest value opportunities in this field is the extraction of rare earth elements. "These metals are in huge demand worldwide as they're used in all mobile phones and all sorts of high tech products including electric cars.  The current processes used to separate these elements are expensive and environmentally hazardous, so if we could use our technology to simply filter the elements safely one by one it'd have a huge impact."

The science behind Ligar originated and continues to be developed by Ligar's Chief Scientific Officer Dr Miruna Petcu, supported by a polymer development team at Wintec.

Dr Pectu explains the technology. "Molecularly imprinted polymers, or MIPs, are like hungry plastic sponges that can be formed into any shape to exactly mirror and bind to its target in a solution.  The targets can be as small as .05 of a nanometer which is many millions of times smaller than a millimetre.  The MIPs allow us to pick out specific compounds of interest in a solution or mop up unwanted molecules, which we can then release to leave behind a purer product."

Previously MIPs have only been able to sense and detect molecules, not release them to allow for effective filtering and extraction.  Another unique aspect of Ligar's proprietary technology that sets it apart is the ability to make the polymers in much greater quantities than possible before.

"Our scientific breakthroughs have allowed us to make kilograms and potentially tonnes of specifically designed MIPs in weeks or months, rather than just grams over several years. This opens up a wide range of commercial applications and allows industrial scale use for the first time," says Dr Pectu.

Ligar is working with a number of multinational companies and is looking to partner with other commercial and research partners around the globe.

Ligar has been in development since September 2011 and has received investment support from KiwiNet's PreSeed Accelerator Fund from MBIE for three technology projects totalling $436,000.  This funding was matched by WaikatoLink and Wintec.

"We're keen to work with leading players around the world who are keen to pursue new ways of doing things in food, metal removal, contamination, or anywhere else where molecules in the wrong place might be a challenge.  We can't investigate all the applications ourselves so we're looking for research partners to help us too," says Slaughter.