New professor looks to a future in data 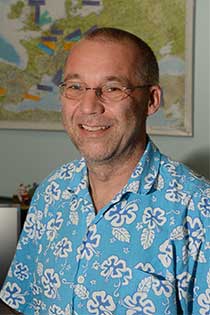 New appointment: Bernhard Pfahringer has been appointed professor in the Computer Science Department in the University of Waikato's Faculty of Computing and Mathematical Sciences.

It's a long way from Vienna to Hamilton, but it's a move Bernhard Pfahringer is glad he made. After 15 years on the staff at the University of Waikato, Bernhard has just been made a professor.

Making the move to the Waikato

Professor Pfahringer first came to the University as a post-doctoral research fellow in 1996 to work for a year in the Machine Learning Group in the Computer Science Department. He enjoyed it so much that in 1999 when a job came up in the same department, he applied for it and began work as a Senior Lecturer in 2000, bringing his family with him from Austria.

"I knew Waikato was a great place for the type of work I wanted to do. Also my children were six and nine years old, and we knew Hamilton was a better place than Vienna for young children, so we made the move."

Professor Pfahringer completed his undergraduate study in 1985 and PhD in 1995, both at the Vienna University of Technology. Once at Waikato, he become an Associate Professor in 2007. His area of expertise is in machine learning, where data is collected and analysed for patterns that help predict future trends.

Professor Pfahringer says he is very proud to take up his new position.

"I'm very happy for this recognition for the work I've done by the University. This is a significant step in my career as being professor will open doors and increase opportunities in the future."

Professor Pfahringer is one of five new professors at the University of Waikato in 2015. The others are Linda Nikora and Priya Kurian from the Faculty of Arts and Social Sciences, Deborah Fraser from the Faculty of Education and Grant Samkin from Waikato Management School.

New professor looks to a future in data is licensed under a Creative Commons Attribution 4.0 International License.