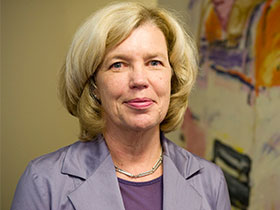 Recognised for services: Robyn Baker has been made an Officer of the New Zealand Order of Merit.

University of Waikato Programme Director Robyn Baker has been recognised for her services to education in the 2015 New Year Honours list, becoming an Officer of the New Zealand Order of Merit (ONZM).

Ms Baker is the Director of the University's Curriculum Enhancement Programme (CEP), which is designed to produce a dynamic and forward-looking curricula over a three-year period.

Before taking up her position at Waikato in October last year, Ms Baker spent 14 years as Director and CEO of the New Zealand Council for Educational Research (NZCER) in Wellington. NZCER is an independent, statutory education research and development organisation, which undertakes research, develops and supports a range of research-based products and services, and provides independent advice on educational matters.

"In this role I built on the past to shape the organisation that is thriving today. Expert knowledge of research remains central to the organisation but most projects are larger and more complex, requiring expertise not only from researchers and statisticians, but also from those with expertise in measurement, IT specialists, item writers and communications experts," Ms Baker says.

"As the leader I placed a strong focus on creating and sustaining the conditions needed for staff to thrive in their roles and to continue to develop their expertise. An important element was the building purposeful teams, often internally to NZCER and frequently in collaboration with other organisations and individuals. NZCER has undertaken a number of projects in science education in collaboration with the Wilf Malcolm Institute at the University of Waikato."

University of Waikato Acting Vice-Chancellor Professor Alister Jones says the honour is outstanding recognition of Ms Baker's services to education at this level.

"Robyn is a great example of the calibre of staff we are attracting at the University, and we're fortunate to have someone with her extensive expertise to lead the Curriculum Enhancement Programme."

Ms Baker says she had mixed feelings on hearing she'd received the award.

"There are many people who are doing useful things in education and much of this work is undertaken in teams, so it doesn't rely on the work of just one individual. Given the systems of awards we have however, I do think it is great that educators are acknowledged for the things they do that are beyond just doing the job they are paid for."

The CEP runs from 2014 to 2016, and will suggest ways to enhance the support provided to students from pre-enrolment through their programmes and into work or further study. The way courses are taught is also a focus, particularly effective approaches for blended and online delivery. It will review the current curricula and recommended improvements will be implemented from 2016.

ONZM for University of Waikato Programme Director is licensed under a Creative Commons Attribution 4.0 International License.