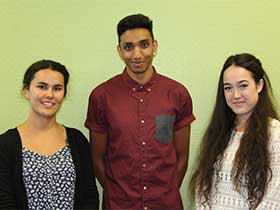 The inaugural three recipients of the Edna Money Future Pacific Leaders Scholarship were welcomed to the University of Waikato in late February.

They were the first students to benefit from the $1 million bequest by the late Morrinsville farmer and accountant Edna Money, who died in 2013, aged 94.

The Edna Money Future Pacific Leaders' Scholarship was launched in 2014 and provides support for Pacific students to achieve academically and develop leadership skills through a tailored leadership and personal development programme.

Three scholarships will be offered each year for students undertaking fulltime study. The scholarships are worth $6000 per year for up to three years.

Vijay, from Pakuranga College, is studying a Bachelor of Management Studies and says he only applied because his careers adviser at school pushed him into it.

"It means a lot to me. I was a Pacific leader at school and want to motivate other students."

Kristyn, from Sacred Heart Girls' College in Hamilton, says her family had always encouraged her to succeed.

"This has helped me recognise my true passion, which is science," she says.

Kristyn is beginning a BSc (Tech) while Lepeka, from Tauranga Girls' College, is studying a BCMS.

She is looking forward to her studies getting underway.

"I'm very fortunate to be here," she says.