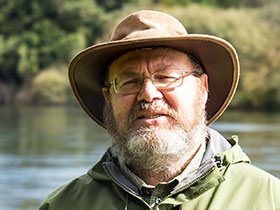 Dr Willem De Lange says no-one should be concerned about the possible fault at this stage.

University of Waikato scientists have identified the existence of a possible fault under Hamilton but say much more work is needed to conclusively prove its existence and no-one should be concerned.

Using existing evidence, they estimate any risk of the possible fault causing an earthquake is slight but they are applying for funding to carry out further research and answer two key questions: when did it last move and by how much?

Dr Willem De Lange and Dr Vicki Moon say their work shows indications of a fault running roughly from the Gordonton area, north east of Hamilton towards Temple View in the south west.

Without more work, it is almost impossible to tells its exact course, when it last moved, or by how much.

The possible discovery changes nothing in terms of risk to the city's residents, Dr De Lange says.

"If it is a fault, it's always been there, we just didn't know about it."

Dr Moon says her research shows what she interprets as changes in soil strata caused by a fault and she has also found what she believes to be evidence of liquefaction at sites around the region.

The amount of data backing the presence of a fault was growing, she says.

"There are just too many coincidences," she says.

The existence of a fault line under Hamilton would not surprise the pair, which say the reason it hasn't been found before is because no one has really looked.

The Waikato landscape has been heavily modified and is overlaid with metres of soft sediments laid down many thousands of years ago, meaning little or no evidence of fault lines remain.

The seismic hazard for Hamilton, as defined by the National Seismic Hazard Model, is low, relative to most of New Zealand. However, the model assumed similar faulting to nearby active regions, and Dr De Lange says if their find is confirmed as a fault, it may even mean Hamilton's risk level falls.

"The assumptions used in assessing the risk for Hamilton may have over-estimated the risk, or under-estimated it, we don't know."

If they had over-estimated the risk, the presence of more accurate data may see that risk level decrease.

Faults are deemed active if they have moved in the last 125,000 years and the Waikato basin currently has none, with the nearest being the Kerepehi Fault, running down the middle of the Hauraki Plains.

The main piece of evidence for the existence of a fault comes from an excavation in Hamilton's northern suburbs.

Dr Moon says it appears to show faulting across a four-metre width and indicates vertical movement of about 500mm.

They say aerial photography gives no indication of the direction the fault runs, although detailed measurements of the shape of the landscape suggest the distribution of hills in the area may be indicative. Sharp, right-hand bends in the Waikato River may also be an indication of faulting.

The pair say they want to alert geotechnical engineers and engineering geologists to look for anything unusual in excavations which may provide more information.

The pair have presented their findings to the Hamilton City Council and Waikato Regional Council and informed the Earthquake Commission, GNS Science and the Ministry of Civil Defence and Emergency Management.

University of Waikato Vice-Chancellor Professor Neil Quigley says the research is an example of University staff working on important issues and providing valuable information to the community.

"Research such as this provides a significant contribution to the overall knowledge of our region."

Waikato Regional Council's regional hazards team leader Adam Munro said the new information from the University would be used during planning for potential disasters and in information made available publicly on risks.

"The regional council helped fund the research which in part led to the identification of this potential new fault line.

"This is part of our ongoing role to better understand the region's potential hazard risks. Previous research in the region has helped identify other fault lines and potential for liquefaction.

"The council and the Waikato Civil Defence Emergency Management Group will take the University's latest advice into account during our planning for potential earthquakes. We'll also be keen to see what further research will tell us about this possible fault and the risks it presents. To that end we will support further studies by the University and look at making a contribution to the cost of this."