Social history of medicine under the microscope 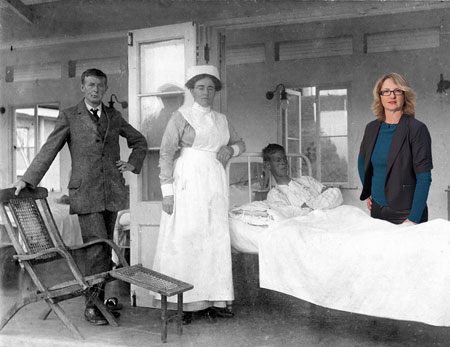 Professor Cathy Coleborne will look at the social history of medicine in New Zealand at a free public lecture on 16 June (photo courtesy Waikato DHB).

How do you explain your symptoms to your doctor? How much do you trust the advice and medicine you receive? How do you treat people with mental illness? And is depression the pandemic of the 21st century? These are some of the questions raised by the social history of medicine, the topic of a free public lecture at the University of Waikato in June.

Professor Cathy Coleborne, from the History Programme in the Faculty of Arts and Social Sciences, has researched the social and cultural histories of medicine, health and institutions in New Zealand and Australia, with a particular focus on mental health, and how history has the potential to challenge and reshape medicine today.

In her Inaugural Professorial Lecture on 16 June, Professor Coleborne will talk about how past generations of people understood illness in their own historical context; what language they gave to their symptoms, and how it was understood by doctors. She'll also explore the idea that a disease or illness is often bound by its time and place in history.

Professor Coleborne says it's important for society to have a healthy criticism of the medical industry. "Using an historical lens helps give us perspective and enables us to measure the influence of the social and cultural power of medicine."

She says that in the context of our modern understanding of mental health for example, people often have a wholly negative view of historical treatment of mentally ill patients. "But some research shows that in the second half of the 20th century a more open dialogue was starting to occur between doctors and the families of a patient, and care was often shared between an institution and the home."

Professor Coleborne came from Melbourne to the University of Waikato as a lecturer in 1999, appointed to teach the social history of medicine, world history (now global history) and Australian history. She was promoted to professor last year and says the focus of her academic career has been a combination of three things: research, teaching and community outreach, and she has developed a network of relationships with local DHBs and healthcare practitioners.

Professor Coleborne also has an interest in digital history, and will have one of her students live tweeting from the lecture on 16 June, using the hashtag #medicalsubjects. Her twitter handle is @CathyColeborne

Inaugural Professorial Lectures are free and open to the public and are the University of Waikato's way of introducing new professors and their research to the wider community. Professor Coleborne's lecture Medical Subjects: History, Health, and the Present is on Tuesday 16 June from 6pm at the Gallagher Academy of Performing Arts. The Opus Bar open from 5pm.