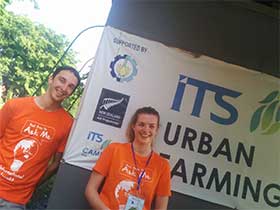 Two students from the Faculty of Computing & Mathematical Sciences have spent 10 days in Indonesia at an event focused on improving sustainability in developing countries.

The two travellers journeyed to Surabaya, Indonesia's second largest city to take part in the event. During their stay they were hosted by local university, Institut Teknologi Sepuluh Nopember (ITS).

"The purpose of CommTECH Insight was to explore, in depth, the culture and history of Surabaya and to use the city as a case study to learn about sustainable development, both from an environmental and economic point of view," says Mark.

Grace used the trip as an opportunity to immerse herself in another culture. "I was able to form connections with people who have very similar study interests to me, but who come from very different backgrounds, which is the ideal environment for innovation. Due to the relationships formed I think there is a strong possibility for research collaboration between me and ITS in the future," says Grace.

Both students could see major benefits to society if sustainable practices are embraced on a larger scale, particularly within the information technology sector.

Mark and Grace were also impressed by the cultural and scenic highlights on offer at CommTECH, including batik, white water rafting, Indonesian food and dancing, and a trip to an active volcano.

Mark was home-schooled for the majority of his school years, and spent his last two years of school at Bethlehem College in Tauranga. "I chose Waikato University for its location and because at the time it was the only university in New Zealand to offer mathematics and computer science in a single bachelors degree."

Grace is a former Waikato Diocesan School for Girls student. She began tertiary study at Victoria University, before transferring to the University of Waikato. As part of a BSc she is majoring in Computer Science, with supporting papers in graphic design, philosophy, psychology and Japanese.