A kaupapa Māori approach to ageing. 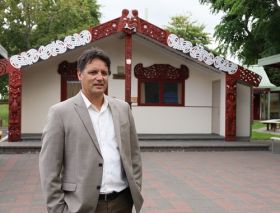 University of Waikato researchers in collaboration with Rauawaawa Kaumātua Charitable Trust (Rauawaawa) have been awarded more than $900,000 for a new study for the Ageing Well National Science Challenge.

The research seeks to address the mana motuhake ‒ the identity or autonomy ‒ of kaumātua aged 55 or older by investigating the health outcomes of a ‘tuakana-teina’ (mentoring) peer-educator model, which Professor Hokowhitu says will result in evidence-based interventions to meet social and health needs of kaumātua and their whānau.

Professor Hokowhitu says underpinning the research is the idea that kaumātua assert their independence and autonomy so they can live a life of longevity and quality. “We need to get away from what we call the ‘deficit model’, the notion that the increasing percentage of elderly over the first half of the 21st century will lead to an increasing burden on the socio-economic system.

“The tuakana-teina, peer-education model introduces a kaupapa Māori approach to social integration and engagement; the ‘for-kaumātua-by-kaumātua’ principle recognises the continuing value and contributions that kaumātua can make to society; and the strengths-based approach will de-emphasise the disability of kaumātua and centralise kaumātua mana motuhake—their potential, capacity, and ability.”

Professor Hokowhitu says he’s excited to be working with a strong team of researchers, including Dr Sophie Nock and Hineitimoana Greensill from FMIS and Dr Mary Simpson from WMS. Professor Oetzel and Dr Simpson have a longstanding relationship with Rangimahora and others in Rauawaawa based on trust and reciprocity.

“It’s important that our methodological approach ensures kaumātua will be self-determining throughout the research,” says Professor Hokowhitu.

“The research cornerstones of whakawhanaungatanga and tino rangatiratanga are fundamental to good kaupapa Māori research. It’s also really exciting for us from FMIS because it signals the central role that Māori and indigenous studies knowledge can play in a whole host of research questions, based on the simple idea of mana motuhake, which in this context means the potentiality and innovation of indigenous knowledge in relation to controlling one’s own destiny.”

The Kaumātamua Mana Mothuake project is one of four announced last week by Acting Chair of Ageing Well National Science Challenge Dr Dianne McCarthy, and all four have a Māori or Pacific focus in recognition of the specific challenges and opportunities faced by Māori and Pacific peoples to age well.

The four projects, totalling $3.25 million, look at areas across all stages of life, including intergenerational relationships, and experiences of the older generations, and are led by researchers from universities and community agencies.

The Ageing Well National Science Challenge, was launched in March 2015, with a vision to push back disability thresholds to enable all New Zealanders to reach their full potential through life, with particular emphasis on the latter years of life. Following the March launch nine projects were funded that covered topics ranging from housing tenancy, frailty and lifestyle interventions, and innovative approaches for stroke prevention and recovery. These projects are currently underway.

The National Science Challenge for Ageing Well is funded by the Ministry of Business Innovation and Employment and represents a strategic partnership between the universities of Waikato, Otago, Auckland, Canterbury, Massey, Victoria and AUT, together with the Centre for Research Evaluation and Social Assessment, and AgResearch.