A new App to catch a carp 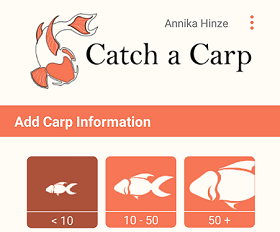 The public can help control the spread of invasive fish with a new app being launched at this year's Fieldays.

The public can help control the spread of invasive fish species with a new app being launched at this year’s National Agricultural Fieldays at Mystery Creek in Hamilton.

Catch a Carp is the work of computer scientists Dr Annika Hinze and Brian Cole and environmental scientist Associate Professor Kevin Collier from the University of Waikato, working in conjunction with Waikato Regional Council. The WRC has a strategy in place for dealing to koi carp, but needs data to make informed decisions to take action in the best possible locations.

Anyone can download the app and use it when they see pest fish in any river or stream. Brian Cole, industry liaison manager for Catch a Carp, says farmers and other people who work or walk around waterways can simply tap-in, take a photo and report what they see. The GPS will log the specific geographical location, and then app users can key-in additional information.

Koi carp are bottom feeders. They disrupt the silt, destroy plants and cause erosion.

“We probably won’t ever be able to get rid of invasive fish altogether,” Mr Cole says. “But if we can collect data as to their whereabouts, whether they’re spawning or simply loitering, it will enable the council to direct resources to where the need is greatest.”

Dr Hinze says citizen science means that the public is involved in scientific endeavours through the gathering and interpretation of data. “We hope that our app enables and supports interested members of the public to easily make contributions that will benefit our region.

“Typical location-based apps provide data to their users – for Catch a Carp we have reversed this process, making users the providers of data,” Dr Hinze says. “We’re grateful to the farmers and other test-users who gave feedback and helped us to make this app easy to use.”