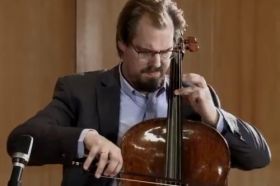 A composition by the University of Waikato’s Associate Professor Martin Lodge will be recorded in Berlin in December.

Omanu for virtuoso solo cello was commissioned for the 2016 Waikato International Cello Fest, held in August and performed during the festival by the German cellist Wolfgang Schmidt. The performance was well received by the festival attendees, encouraging Schmidt to record the piece back in Germany.

The composition was inspired by Omanu beach near Tauranga, where Dr Lodge grew up. “Memories of birds and the sea were in mind when I wrote the music,” he says.

The recording will take place mid-December in the Teldex studios. Teldex is one of the most famous recording studios in the world, having hosted performers ranging from the Berlin Philharmonic Orchestra to Britney Spears.

Originally built in the 1890s as a multipurpose venue, the building was restored after the ravages of World War II and turned into a state-of-the art recording studio by the Telefunken company. It has remained at the forefront of the recording industry ever since, later passing into the hands of Warner subsidiary Teldec.

Dr Lodge is excited about the recording of Omanu. “To have one of the world’s leading cellists recording one of your works in an iconic facility, like the Berlin Teldex studio, is a dream come true,” he says.

As far as he is aware, he is the first New Zealand composer to have a work recorded in these historic studios.