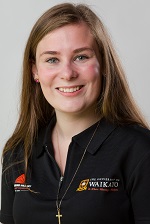 Theatre star Georgia Pollock has received a Sir Edmund Hillary Scholarship from the University of Waikato.

From school plays to the world stage. At least that’s the plan for Cambridge local Georgia Pollock who’s won a top scholarship from the University of Waikato.

The former Sacred Heart Girls’ College student is the proud recipient of a Sir Edmund Hillary Scholarship - an all-fees paying scholarship that supports students in a chosen discipline, and provides mentoring, personal development and leadership opportunities while they study.

From the age of five, theatre has been a huge part of Georgia’s life and she plans to keep it that way. Now in her second year of a Bachelor of Arts, double majoring in Theatre and English, she says the scholarship will be crucial for balancing all her commitments.

“Theatre takes over your life – which is fantastic, but it makes maintaining a social- and academic-life quite difficult,” says Georgia. “The Sir Edmund Hillary Scholarship Programme will be the key to making it all work because of the mentoring and networking support we’re given.”

Originally from England, Georgia moved to Cambridge when she was nine. The first show she remembers performing in was her primary school’s rendition of the Nativity Scene. Now she’s got a long list of shows to her name including, Wizard of Oz, Spelling Bee and Godspell.

Musicals can be very draining, especially when there’s a lot of dancing involved, but Georgia says crying on stage is the most challenging task of all.

“Having a meltdown on stage takes every ounce of your energy – give me a long dance number any day!”

But the rush of being on stage makes the grueling rehearsals all worth it.

“Immersing yourself in the role of your character is totally liberating and I’d say anyone who hasn’t tried it yet needs to.”

Georgia plans to do a degree in teaching once she completes her BA with the hope of taking her love for theatre abroad and teaching it to people who have limited access to such experiences.

“I also hope to one day travel to England and try my luck on the West End.”

243700; 243701
Subscribe for more Stories and research about Sports and the Arts and Stories about major scholarships stories

If you're interested in knowing when more Waikato stories featuring Stories and research about Sports and the Arts and Stories about major scholarships are published, enter your email address to be notified.