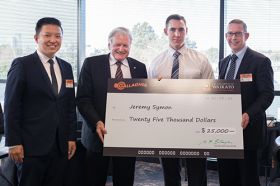 The former Hamilton Boys’ High School student is in his fourth year of a Bachelor of Engineering (Hons)(Software Engineering), and as well as the scholarship’s financial support, will receive industry experience working on a research project at Gallagher.

Sir William Gallagher presented the award at an official function held at Gallagher’s offices in Hamilton on 30 August.

“I was already thinking about going on to do a Masters,” says Jeremy. “But now I have this scholarship, it makes it a much easier decision and it will tie in with my work at Gallagher. I’m very grateful to them for this opportunity, and also to my lecturers from the University’s Cyber Security programme.”

Jeremy spent last summer working at Gallagher and has worked there part-time on software development and software testing since then. Once Jeremy has completed his study, he hopes to get a full-time job at Gallagher.

Sir William is a long-standing supporter of the University of Waikato and Hamilton-based Gallagher is one of the world’s leading technology innovators in physical security systems.

“As the world moves toward an increasingly cyber environment, Gallagher understands the importance of investing in continuous research and supporting expertise in this developing industry,” says Sir William. “Congratulations to Jeremy and we look forward to an ongoing partnership.”

Head of Cyber Security at Waikato Dr Ryan Ko says Jeremy is a well-deserved recipient of the scholarship.

“He is one of the top Honours students in the Software Engineering Programme, and his team came third in the New Zealand Cyber Security Challenge.

“Since Waikato's establishment of New Zealand's first Master of Cyber Security, several alumni have benefited with very successful jobs and internships in organisations such as Gallagher, INTERPOL and Deloitte. This scholarship highlights our deep industry relationships and the quality of our rigorous scientific research at the Cyber Security Lab.”

Sir William helped open the University’s cyber security lab in 2013 and Gallagher is a partner in the MBIE-funding STRATUS project (Security Technologies Returning Accountability, Transparency and User-centric Services in the Cloud) headed by Waikato University.

The Sir William Gallagher Cyber Security Scholarship was established in 2015 to support academically talented students studying towards a Master of Cyber Security (MCS) at the University of Waikato. The value of the scholarship is $25,000 for students undertaking a 180-point MCS and $20,000 for a 120-point MCS to cover tuition fees and a stipend.