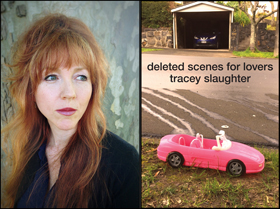 Dr Tracey Slaughter and the cover of her new short story collection which is being launched on campus next week.

University of Waikato lecturer Dr Tracey Slaughter will launch her new collection of short stories on campus at the Art Fusion Gallery next Thursday (26 May).

Dr Slaughter, who teaches on the University’s creative writing programme, has a string of awards for her writing, including the international Bridport Prize 2014, the BNZ Katherine Mansfield Awards in 2004 and 2001, and the 2015 Landfall Essay Competition.

Holly Walker, writing in The Spinoff http://thespinoff.co.nz/category/books/ said this about Dr Slaughter’s latest collection: “Tracey Slaughter has quietly gone about these past few years writing electrifying short stories unlike anything else published in New Zealand. Her new fiction is collected in a powerful, sometimes harrowing book.”

From small town New Zealand herself, Dr Slaughter’s work often focuses on the goings-on within those tight-knit communities. “I’m familiar with that bogan/surfie culture and I worked amongst it; in takeaways, service stations and pubs, watching that waxhead/petrolhead world go by.

“But I think it’s the writer’s job to see past labels, and hunt the pulse of the human story dwelling beneath, whatever social group a character might seem to fall into. I like the drama of lower decile life. It often stands out in the sharpest relief to me, and I never turn those stories away because they’re not decent, representative or seemly.”

Dr Slaughter says short stories have always been a home for the “lonely voice” – a form with its roots in the underbelly, haunted by outsiders. And short story collections are not greatly favoured by publishers who normally choose “the chunkier comforts of the novel rather than the intense fix of short fiction”.

“So I’m thrilled VUP liked my work enough and have faith that it will sell.”

She says her favourite story in the collection is probably The Longest Drink in Town, “as I fell in love with much child/teen characters and ached for all of them".

Deleted Scenes for Lovers retails for $30 and will be available at the launch (at 5.30pm) and in bookstores.