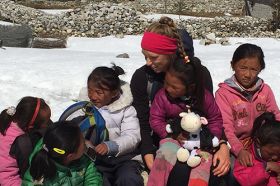 It was a life-changing trip to Nepal in 2015 that prompted Hillary scholar and track athlete Kristie Baillie to return for a second visit.

The Morrinsville local, who is studying a Masters in Sport and Leisure Studies, went back to Nepal in June to spend three weeks teaching English in the small town of Phidim.

Kristie was one of four Hillary scholars to spend 16 days in Nepal last year as part of the Step Higher Awards where scholars travel to Khumbu Valley to see first-hand the work Sir Ed started in the local communities.

Students who receive the Step Higher Award are required to fundraise for the Himalayan Trust, and Kristie did so by trekking up Mt Te Aroha four times in 48 hours.

She relaunched the initiative again in May this year to fundraise more money for the Trust before her second trip. Dubbed ‘Mt Te Aroha 4x in 48hrs Round II’, Kristie successfully raised further funds for the cause.

Last year’s trip left a strong impression on Kristie but it wasn't until almost a year later that she decided there was more she could do for the Nepalese people. After a few months of planning and organising, she finally returned.

“The entire process was instigated through a connection that I made during my first trip in 2015.  Earlier this year I realised a strong part of me wanted to go back to try make a difference.  I contacted my Nepali friend and he organised for me to stay and live with his sister and her family,” she says.

Kristie travelled for 30 hours to get to Kathmandu, and spent five hours on the back of a motorcycle to get to Phidim.

“I volunteered to help with English language at Shree Sukhabodh Secondary School, which ended up with me being fitted into the teaching schedule and taking a class each period. The students' English was more limited than I had anticipated, and my Nepali was non-existent, so it was a challenging but a hugely wonderful experience.”

Having now returned from the expedition, Kristie says the experience was one she was grateful to have experienced.

“I'm still of the opinion that I learnt more throughout my time there than the students actually did,” she says. “The people I spent time with and got to know were happy, hardworking and grateful for what they had. It was just a beautiful culture to be immersed in.”