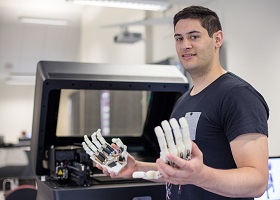 Mahonri Owen is working on a brain-controlled prosthetic hand that can do more than open and close.

A University of Waikato mechanical engineering student has been awarded a major scholarship to develop a brain-controlled prosthetic hand.

Mahonri Owen is the recipient of a Health Research Council Māori PhD Scholarship worth $111,550 to assist his work to develop a prosthetic hand that can perform the basic functions of a human hand.  It’ll involve mechanics and electronics.

“Life is never the same when you lose a hand or any body part for that matter – through injury, or warfare, genetic dysfunction or illness,” Mahonri says.

“What I’m attempting is to design a brain-controlled prosthetic hand that is easy to produce, easy to adapt to and affordable. One that can restore function and quality of life in a better, faster and cheaper way than we’ve seen before.”

To date, his research has seen him make several different hands using an Arduino micro-controller and off-the- shelf components.  His skeleton hand was made using on-screen CAD (computer aided design) to map-out the mechanism. He then created the 50 plus components using an Objet 30 3-D printer, which lays the design down in resin 0.3 of a millimetre at a time.  As one layer hardens, another is added until the skeleton is built up. The first hand took seven hours to print.

Using Electroencephalography (EEG), the hands are able to execute basic movements, such as open and close.  What Mahonri wants to develop is a more sophisticated hand. “I want to make my own EEG headset specifically for hands. So when the brain says ‘pinch’ that’s what the hand will do.”

He says the use of neutral interface (brain control) would also increase the rate of prosthetic acceptance. “The trauma and pain that accompanies the loss of a limb is hard to overcome, physically and mentally and if my research can make recovery easier, then I’ll be very happy.”

The idea to work on the electro-mechanical hand for his doctorate came from a suggestion by Mahonri’s academic supervisor Dr Chi Kit Au from the University of Waikato’s Faculty of Science and Engineering. The notion fitted perfectly with Mahonri’s desire for his study to benefit others.

“I’m also conscious of the number of people, Māori in particular, who lose limbs through diabetes. So if my research can assist their recovery then it will have been worth it.”

Mahonri (Ngāti Tuwharetoa and Ngāpuhi) has had good support from his iwi over the years, but he says he wouldn’t be able to complete his doctorate without this Health Research Council scholarship.  It means he can come to university knowing his wife and two young children are going to be well-looked after.