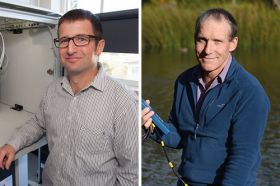 Two leading academics from the University of Waikato’s School of Science have been announced as winners in this year’s KuDos Hamilton Science Excellence Awards.

Professor Arcus specialises in molecular biology and evolution. His KuDos nomination focused on research into mycobacterium tuberculosis, a disease that asymptomatically affects one-third of the world’s population and is one of the three deadly diseases, including malaria and HIV. The disease can persist in a latent state for the life of its human host, or may reactivate after months to years causing symptomatic tuberculosis disease. Gaining a better understanding of the bacterial replication rates occurring during latency would help in the design of drugs to treat the disease.

Professor Hicks is a leading freshwater ecologist. Two of his projects include the remote sensing of water quality in lakes. This technique has the potential to revolutionise monitoring of fresh waters and make major cost savings. Professor Hicks also led the development of the field sampling strategy of didymo, and this method is currently the primary didymo surveillance tool used throughout the North Island. This technology has been transferred internationally to five countries currently facing similar issues with didymo.

Other finalists from the University of Waikato were Associate Professor Nicola Starkey whose research focuses on health and driver behaviour and whose health research is predominantly focused on traumatic brain injury, and Senior Research Fellow Dr Charis Brown who leads and develops research in cancer and chronic disease and Pasifika health. Professor Jonathan Scott, who has designed and patented techniques that render the electrical leads of spinal-cord stimulator and deep-brain stimulator implants safe for use in MRI scanners, and Dr Aydin Berenjian whose research has resulted in developing a sustainable intensified fermentation technology for production of milk based functional drink rich in MK-7 at a relatively cheap price.

The KuDos Awards were launched in 2007 to celebrate science in the region. This year’s winners were announced at an awards dinner on Wednesday 19 October.