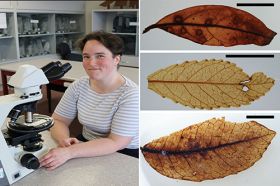 Dr Beth Fox used fossilized leaves to find evidence of a sharp increase in atmospheric CO2 levels associated with a major collapse of the ice sheet.

An ancient crater lake in Central Otago has provided scientists with new insights into carbon dioxide changes and the effects those changes had on the Antarctic ice sheet 23 million years ago.

Dr Beth Fox, a paleoclimatologist from the School of Science at the University of Waikato, says fossilized leaves found at Foulden Maar near Middlemarch hold evidence of a sharp increase in atmospheric CO2 levels associated with a major collapse of the ice sheet.

Dr Fox and her colleagues Drs Tammo Reichgelt and William D’Andrea at Colombia University in the US found that changes in the stomatal cells and carbon isotope ratios in the leaves indicated a major increase in the levels of CO2, rising from about 500 parts per million (ppm) to between 750 and 1550 ppm over a span of less than 10,000 years. “What surprised us was how such large CO2 fluctuations happened over geologically, relatively short time scales,” says Dr Fox.

“We found that atmospheric CO2 levels began to rapidly increase around the same time as the ice-sheet began to decline, and more importantly, even when the CO2 levels dropped back to previous levels, the ice kept on melting. Once the process of destabilisation of the ice-sheet was kick-started, it could keep going by itself.”

Dr Fox says this information is important as scientists study today’s CO2 concentrations and the melting ice in Antarctica. “But we need to build on this new information by doing more analysis and modelling. We don’t yet know at which point between 500 and 1550 ppm that destabilisation of the ice took place and we’d also like to look at different plant species to confirm what we’ve found so far.”

Dr Reichgelt says some models have shown that at the rate we’re going right now, the Antarctic ice sheet might reach a critical tipping point and start destabilising very quickly. They now have evidence that it’s happened before.

The idea to investigate stomata in the leaf fossils and reconstruct CO2 levels from millions of years ago came to Dr Fox when she was studying for her PhD at Otago University, but she didn’t follow it up until she completed her doctorate.

She says the study was made possible by the fantastic level of fossil preservation in Foulden Maar, where soft tissues are preserved right down to the cellular level, along with the fact that the sediment contains annual layers, allowing for much more accurate dating than is normal for such an ancient deposit. “It's an amazing site, with many more stories to tell us about how climate has changed in the past,” Dr Fox says.