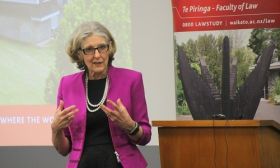 New Zealand still has a lot to do to achieve gender, ethnicity and cultural diversity representation in the legal profession, according to New Zealand Law Society executive director Christine Grice.

In her lecture, ‘Lawyers – the Profession into the 21st Century’ delivered at Waikato University earlier this month, Ms Grice said there’d been a significant change in the profession over the last 25 years but New Zealand lawyers were still “wrestling with diversity”.

“Years ago your stereotype for a lawyer was a white male called John aged 38 practising as a solicitor in a firm in Auckland. It hasn’t changed much,” she said.

Ms Grice was expecting 2016 to become a milestone year – a year when female lawyers accounted for 50% of all licensed lawyers in New Zealand.

However, Ms Grice noted that significant challenges still lay ahead.

“Women make up about 60% of employed lawyers in multi-partner practices, but only approximately 24% of partners. Even fewer are QCs. We don’t see women in the numbers we should in the higher echelons of the profession.”

Another worrying trend was the disparity in pay between male and female lawyers, she said.

“We know that lawyers in their first five years of practice are paid at similar levels. But after that, the difference becomes quite significant. By year 10, the average pay gap between male and female lawyers reaches over 30%, even when normalised to hours worked.”

A former President of New Zealand Law Society, Ms Grice said this trend spoke of some systemic underlying problems and she saw that as a challenge for the legal profession.

“Women lawyers spend more of their time in family law – the area that has become the worst paid area of law in recent years. In addition, women lawyers’ charge-out rate is on average 7-10% lower than that of men.”

Ms Grice is a former partner of Hamilton-based Harkness Henry law firm, an experienced litigation lawyer, an arbitrator and board member. She is a fellow of and does governance training for Zealand’s Institute of Directors, as well as sitting as a judge in the Cook Islands High Court. She said that lack of women in the profession is not just inequality issue.

“There is a lot of research confirming that diversity in decision-making leads to much better decisions. Most of the research is based on businesses and business board decisions that followed the recent global financial crisis. The research suggests that boards with women members were more likely to have survived the crash.

“Gender diversity is only a small piece of the subject of diversity at large. The information we have indicates that we [New Zealand] are nowhere near reflecting proportion of the population from various cultural and ethnic backgrounds. Pacifica, Māori, Asian communities, as well as sexual orientation minorities are under-represented in the profession.”

Looking to the future, Ms Grice said lawyers needed to embrace new technologies and the changes they were bringing to the legal environment.

“Lawyers have to embrace diversity, embrace technology knowing that the role of the profession will not stay the same. But, at its heart as a trusted advisor, the role of lawyers in the government machine, the role of servicing the court, will not go away.”