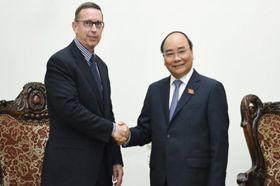 A week-long trip to Vietnam by Vice-Chancellor Professor Neil Quigley has strengthened the University’s existing links with the country.

Professor Quigley was received by Vietnam Prime Minister Nguyen Xuan Phuc on 16 November in Hanoi, and says his visit will open new cooperation opportunities with Vietnamese agencies. Professor Quigley was accompanied by the Director General of the General Department of Geology and Minerals of Vietnam, Associate Professor Đỗ Cảnh Dương.

Prime Minister Nguyen Xuan Phuc says he looks forward to more collaboration with the University in environmental areas such as geology and geothermal, environmental protection as well as cyber security, crime science and teacher training. He encouraged Waikato and other New Zealand institutions to collaborate with Vietnam on areas of importance for the continued development of the country.

Ten University of Waikato law students, who have been awarded more than $100,000 in Prime Minister’s Scholarships for Asia, are also in Vietnam at this time.