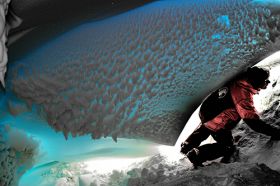 A team from the University of Waikato is one of seven featured in a National Geographic documentary series following Kiwi scientists in Antarctica.

The documentary, Continent 7: Antarctica provides a window into the everyday operations of an Antarctic research base, and the challenges of working in one of the most inhospitable environments on the planet.

The Waikato team, led by Professor Craig Cary, was working on the Dry Valley Ecosystem Resilience (DryVER) project, led by the International Centre for Terrestrial Antarctic Research (ICTAR) at the University of Waikato. It is New Zealand’s flagship research programme in the McMurdo Dry Valleys.

DryVER brings together a cross-disciplinary team of international researchers to comprehensively examine the Dry Valley ecosystem and its potential responses to impact from human activities and climate change. Using cutting-edge methodologies, the DryVER research team will generate new information on the sensitivity and resilience of Dry Valley ecosystem components and facilitate evidence-based management of the unique and fragile ecosystems of terrestrial Antarctica.

“It was an amazing opportunity to have National Geographic in the field with us during the expedition,” says Professor Cary.

“The cameraman and his team became a part of our team which enabled them to witness and experience the science happening in real time. The beauty of this approach is that they were able to capture not only the difficulty in doing science in Antarctica but also how this work is trying to understand how this frozen continent will respond to a changing world.”

Throughout the series, research teams explore science that will lead to answers about how climate change in Antarctica could affect the rest of the world, particularly studying sea-level rise. They look at life of the mega-fauna, orcas and minke whales which migrate to the frozen continent each year, to the microbial life that exists in the unique, almost alien, Dry Valleys.

NZARI director Professor Gary Wilson says National Geographic’s support has helped launch some challenging new research expeditions deep into the interior of Antarctica to investigate how vulnerable Antarctica, its ice sheets and ice shelves are, as the Earth's oceans and atmosphere warm.

"At the same time we hope to learn how the changing ice cover and temperatures will impact the fragile and iconic life of Antarctica and the Southern Ocean."

The global launch of the series hit screens around the world, including New Zealand, on National Geographic Channel 072, on November 15. The series has a potential audience of 440 million in 171 countries and 45 languages. A second season is currently being filmed at Scott Base.