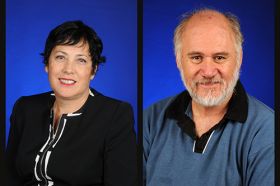 Professor Linda Tuhiwai Smith and Dr Tom Roa have been appointed to the Waitangi Tribunal.

Minister for Māori Development Te Ururoa Flavell has appointed two prominent Māori academics from the University of Waikato to the Waitangi Tribunal.

Minister Flavell says the new appointees are a great addition to the Tribunal.

“Professor Smith and Dr Roa are highly regarded for their expertise and extensive background in research and in historical knowledge,” Minister Flavell says.

“Members of the Tribunal investigate and report on claims made against the Crown for breaches of the Treaty of Waitangi, which includes assessing large quantities of historical, traditional and legal evidence. Both members possess these imperative skills.”

Professor Smith and Dr Roa join Dr Aroha Harris, Basil Morrison, Dr Robyn Anderson and Dr Ann Parsonson who have all been reappointed to the Tribunal for three-year terms.

Minister Flavell acknowledged the outstanding service of Sir Tamati Reedy and Sir Douglas Kidd who have been members of the Tribunal since 2010 and 2004 respectively.

Professor Linda Tuhiwai Smith is Pro Vice-Chancellor Māori, Professor of Education and Māori Development, and a Senior Advisor, for Te Kotahi Research Institute at the University of Waikato.

She has worked in the field of Māori and indigenous education for three decades and is a well-known advocate for Māori language education having had a key role in establishing Kura Kaupapa Māori and Whare Wānanga Māori tribal universities. She co-led the establishment of Ngā Pae o te Māramatanga, New Zealand’s Māori Centre of Research Excellence.

Professor Smith has served on many committees and organisations and was made a Companion of the New Zealand Order of Merit for her services to Māori and to education in 2013.

Dr Tom Roa is a senior lecturer at Waikato University. He is the principal investigator on the project exploring Māori classificatory system of flora and fauna within Waikato-Tainui. As a historian Mr Roa main focus research interests are translation and interpretation of Māori-English, Te Kingitanga, Waikato-Maniapoto oral and written history and traditions.

Dr Roa an inaugural member of Te Whakakitenga the Waikato tribal governing body, and is a member of Te Aratāura, the executive board of the legislative council of Waikato-Tainui, having served from 2000-2005, before returning as Chair in 2011.