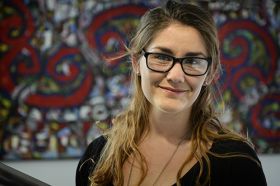 Saska Hayes, graduating with a Master of Laws, says New Zealand needs to take a more humanitarian approach to its refugee quota.

Saska Hayes, who’ll graduate on Tuesday (December 13) with her Master of Laws, has been researching New Zealand’s refugee status determination, the ethics surrounding it, and comparing New Zealand’s policies with other first-world countries.

“Our refugee selection policies favour well-educated and work-experienced refugees; the numbers of refugees of this type that we take, in ratio, are considerably higher than other countries,” she says.

Saska (Ngāti Awa) compared New Zealand’s refugee quota policies with Australia, the USA and Norway. “An important point I found was that those three countries have humanitarian need as a primary consideration for their selection criteria. This consideration is what allows them to respond appropriately to the current refugee crisis and lift their quotas significantly.”

For example, she says, Norway has pledged to take 8000 Syrian refugees by the end of 2017. “But New Zealand doesn’t consider humanitarian need to the same degree. New Zealand has historically framed refugees as a negative financial burden, and this shows in our selection policies and through our insignificant quota,” Saska says.

When she embarked on her masters degree, Saska didn’t intend to study the refugee issue from a policy point of view. “I planned to study quota numbers and to demonstrate why New Zealand should raise its refugee quota, but I ended up looking at refugee status determination as well. Obviously the two are interconnected and while we’re raising the quota to 1000 in 2018, I believe New Zealand needs to take a more humanitarian stance in its policies to ensure the people with the highest humanitarian need are resettled here and we fulfil our ethical obligations to be more humanitarian in this time of need.”

Saska says she’s been challenged in her masters study. Her supervisor was international law specialist Professor Alexander Gillespie. “He really pushes his students. It’s quite nerve-wracking at the time, but it makes you think and work harder, which takes you places you hadn’t thought about before.”

She’d like to think her research will have an impact; at the very least prompt some debate about the refugee issue.

The granddaughter of a Macedonian refugee herself, Saska was born in England and lived in Zimbabwe before coming to New Zealand. She enrolled at Waikato University straight from school and completed a Bachelor of Laws and a Bachelor of Media and Creative Technologies before moving on to her Master of Laws. During her six years of study she volunteered at the Waikato Community Law Centre, “which was a really useful experience”, worked as a Red Cross refugee resettlement officer, and as a home tutor for English Language Partners,  as well as doing the “usual student job” working in retail.

Saska is now doing her Professional Legal Studies (profs) and looking for legal work. “Eventually, I’d like to work in international law, perhaps with an NGO, such as Oxfam or the Red Cross. Right now, I’d like to win a junior lawyer position and I’ve also applied for a UNAKRT internship in the courts of Cambodia.”