Environmental economist is optimistic for future of New Zealand’s freshwater 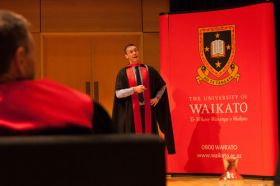 Economists could help farmers improve the environment by identifying simple, low-cost actions to clean up New Zealand’s rivers and streams, that can be phased in over time, says Professor Graeme Doole, who gave his Inaugural Professorial Lecture on 16 August.

One of New Zealand’s leading environmental economists, Professor Doole has spent the past decade researching agricultural farming systems and their loss of contaminants to water, such as sediments, nitrogen, phosphorus and faecal matter.

In his lecture he discussed how New Zealand’s economy has relied heavily on grazing animals, such as sheep and cattle, for the past 150 years. However, meat and dairy exports have come at the cost of our waterways’ health. “Our landscape has become highly productive and profitable, but the impact on our water has been significant,” he says. “In the upper reaches of the Waikato River, towards Taupō, the water is absolutely pristine. But in the lower Waikato about 97% of sites are unsafe for people to swim in because of high faecal loads.”

Having grown up in Taihape on his family’s sheep and beef farm, Professor Doole is keenly aware of the challenges that farmers face to turn a profit, especially during economic downturns. However, he believes that New Zealand’s farming sector is strongly committed to increasing the uptake of “adoptable actions” that help to improve the environment. These actions are simple, durable and cost-effective, such as fencing streams, building sediment traps and planting more trees on steep hillsides with fragile soils.

“It’s about identifying adoptable actions that have the ability to gain positive momentum, rather than trying to impose strict new environmental regulations that are too costly to implement and encourage strong resistance to change,” he says. “If you can find simple technologies that are environmentally friendly but also profitable, then farmers will be more willing to take up those technologies rapidly.

“We have to transform our landscape and this will only be possible if we get buy-in from everybody. The key is working as a team to identify where the low-hanging fruit are.”

Professor Doole’s appointment is jointly funded by Waikato Management School and the Ministry for the Environment. He works closely with organisations such as the Ministry for Primary Industries, the National Institute of Water and Atmospheric Research (NIWA), DairyNZ, Beef and Lamb NZ, and various environmental organisations.