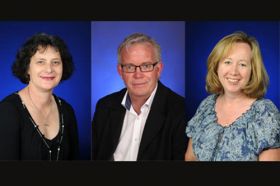 Three academics from Te Kura Toi Tangata Faculty of Education have picked up awards at this year's New Zealand Association for Research in Education (NZARE) awards.

An accomplished and productive researcher, Professor Thrupp’s work has wide policy implications. He is committed to furthering social justice education and this underpins his work, teaching, research and community involvement. He has led research projects both nationally and internationally, and has initiated work on a project on mapping the cumulative effect of educational reform in which he mentored colleagues to publish.

Professor Thrupp has been co-director of a five-nation project, funded by the EU, and recently won a contract (the RAINS project) to study the impact of National Standards in six primary schools - a project that involved the complex organisational task of working with parents, children, teachers and union leaders.

The Sutton-Smith Doctoral Award is given to an excellent doctoral thesis by an NZARE member.Ms Clarkin-Phillips’ thesis entitled “Fighting the odds to make it even: Mapping an affordance ecosystem in a kindergarten community”is about the way policies and practices for, and in, a kindergarten in one of the most deprived regions in Aotearoa New Zealand provided multiple opportunities and affordances for adults to become architects of their own lives.

Examiners praised the thesis for its high quality, noting it was clear and coherent, beautifully written, and the research design robust. Of note was the effective way in which Ms Clarkin-Philipps wove together two theoretical frameworks, Bourdieu and Bronfenbrenner, providing the framing for the data collection. The thesis was commended for its genuine and lasting contribution to the literature on integrated early childhood services.

Dr White is recognised for fostering inclusiveness and her ability to build research communities, including her support for mentoring new researchers. She has taken national and international leadership roles to advance the study of infants and toddlers using visual pedagogies, and her research influence and impact continue to grow as she fosters the capacity of others in new research methodologies.

The New Zealand Association for Research in Education aims to foster excellence in educational research in Aotearoa New Zealand. Its membership is made up of established and new researchers from a variety of organisations in New Zealand and overseas.