Round the Bridges participants get taste of Uni Sport Science 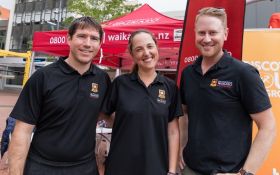 Participants at Round the Bridges had the chance to test their resistance to running fatigue on Sunday with sport science experts from the University of Waikato.

Although the data was only collected on Sunday, Dr Hébert-Losier has pulled out some interesting findings from the data in relation to balance.

“We noticed small to moderate changes in the participants following running the 12km event,” says Dr Hébert-Losier. “As one could expect, the balance ability of participants was worse following the 12km race, which could have implications for injury occurrence.”

Dr Hébert-Losier also said they were interested in the direction of these imbalances, noting that participant imbalances occurred more front-to-back than side-to-side.

Dr Hébert-Losier started work less than three months ago at the University of Waikato Adams Centre for High Performance. The Centre, which was officially opened earlier this year at Blake Park in Mount Maunganui, plays home to top sport science experts and hosts some of New Zealand’s top sporting teams such as the men’s and women’s NZ Rugby 7s squads.

In recent years, the University has increased its commitment to the health and sport industry through regional partnerships, employment of new research expertise, the establishment of a new Faculty of Health, Sport and Human Performance and a proposal for a third medical school in New Zealand.

A keen runner herself, Dr Hébert-Losier was keen to undertake research at Round the Bridges having been involved in running-related projects, and says the event was a great platform for on-the-field research and community engagement.

“I’m looking forward to finding out what the rest of the data shows, particularly in terms of calf muscle function. I’m interested in furthering this line of research and exploring whether running imparts or improves muscle function, resistance to fatigue, and balance, which could have important implications in an aging population.”

The University of Waikato was a strong supporter at Round the Bridges this year, which saw more than 6000 participants running through Hamilton CBD. On top of hosting a site on the day, the University sponsored the event’s Secondary School Challenge.