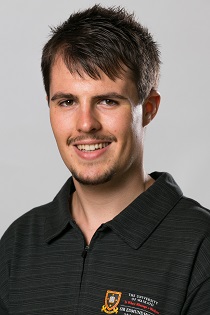 A short film created by screen and media student and Hillary scholar Ashton Ledger was chosen for showcasing at this year’s Tropfest New Zealand – the world’s largest short film festival.

Ashton was named as one of 16 New Zealand filmmakers to make the cut, and his film The Dairy Diaries: Daniel’s Entry screened to a live audience and judging panel on Saturday (27 February) at the TSB Bowl of Brooklands, New Plymouth.

The Hillary scholar and budding filmmaker was excited about the prospect of showing his work to a large audience.

“I was pretty excited to find out the news. The short film had achieved what I set out to do. It was also good to be recognised on a national level,” says Ashton.

“I was actually driving up to Auckland with Mum to pick up my younger brother from the airport when I found out the film had been selected. I got a call from Tim, one of the sound recordists for the short film, who was in the U.S.A. at the time. Funny how things like that happen really.”

Ashton’s film tells a story of a teenage boy hoping to succeed his late father’s title as New Zealand’s champion gumboot thrower and save his family owned and operated dairy shop from permanent closure.

First prize includes a five-day film immersion trip to LA, sponsored by the New Zealand Screen Association and Motion Picture Association as well as a festival sponsored cash prize of $10,000.

Tropfest, which kick-started in Australia, has become recognised as one of the world’s most exciting launch pads for talented filmmakers. The free event has staged stand-alone competitions in New Zealand, South East Asia, the Middle East and the United States.

For Ashton, it’s a step in the right direction.

“I'd like to make a sequel - a new entry into the diary. Nothing beats that when it comes to making films. Film festivals also provide a chance for filmmakers to distribute their works, gain exposure, network with other filmmakers, and rewarded for their hard work.”