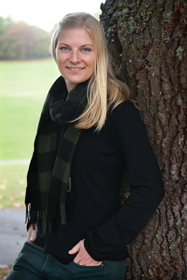 In November, Rebecca will begin work on her Master of Science (Research) in plant physiology supervised by Dr Mike Clearwater at Waikato, and Dr Jim Crush and Dr Shirley Nichols at AgResearch. In 2015, she completed a Bachelor of Science (Technology), also from Waikato.

Rebecca’s Masters research will involve assessing thousands of ryegrass seedlings to determine whether it is possible to select for seedlings with reduced root hair length and density that would decrease competition with white clover for soil phosphorus.

“This is important because in pastures sown with a mix of ryegrass and white clover, ryegrass out-competes white clover, absorbing more phosphorus from the soil and inhibiting white clover growth. Farmers need to put three times more phosphorous on the soil to counteract this than if the two species were grown separately.

“If I can isolate ryegrass seedlings with fewer, shorter root hairs, then the method can be passed onto plant breeders to create a ryegrass with reduced competition with white clover which will reduce the need for additional phosphorus.”

She says white clover and ryegrass is a very durable mix, much easier to maintain than others such as chicory or plantains, and is a traditional, widely-used pasture for grazing stock.

For her research Rebecca will grow seedlings, then lift them from the soil to check the proliferation of root hairs.

“The idea is to create a population of plants with low root hair length and density. If I can do this and prove there is a correlation between these traits and lower rates of phosphorous absorption, then this protocol could be passed on to plant breeders.

“If farmers use less phosphorous on the soil, this has good outcomes for the environment, especially for freshwater ecosystems, as well as having a cost-saving benefit. So if we can produce a perennial ryegrass cultivar with increased environmental benefits, it will be good for both agriculture and the environment,” she says.

University of Waikato Vice-Chancellor Professor Neil Quigley says the scholarship is a great example of how industry can support students’ research.

“Rebecca’s research could have significant impacts for the agricultural sector and I’m very pleased to see her work being supported and recognised by this scholarship.”

Rebecca says it was hearing about the Fieldays Scholarship that encouraged her to consider doing a Masters.

“I saw the previous year’s winners receive the scholarship and I thought this was something I could do. So it was the scholarship that really encouraged me think about doing a Masters as I realised there were organisations out there that care about and value student research.”

The Society and the University of Waikato enjoy a long history of involvement dating back to the inaugural NZ National Agricultural Fieldays in 1969. NZ National Fieldays Society Chief Executive Peter Nation says the Society is proud to continue supporting Waikato students through the scholarship.

“For almost 50 years, the Fieldays Society has been striving to advance agriculture and this is as relevant today as it was in 1969. The future of farming rests on the next generation and we’re proud to facilitate the growth of our economy through our partnership with the University of Waikato and the NZ National Agricultural Fieldays Sir Don Llewellyn Scholarship.”

For more information on the University of Waikato’s involvement at Fieldays, visit http://www.waikato.ac.nz/events/fieldays/