Special Performance for the NZSL Awards 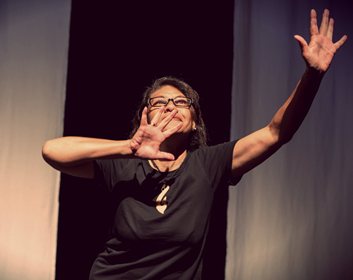 The company behind 'At the End of My Hands' performed a special piece of Deaf theatre at the recent NZSL Awards in Wellington.

The company behind the unique piece of Deaf theatre At the End of My Hands, which has won rave reviews, recently performed at the New Zealand Sign Language (NZSL) Awards in Wellington.

Dr Laura Haughey and the Equal Voices Arts Company were invited to perform a short piece of theatre at the awards event held at Te Papa on May 14.

For the NZSL Awards, the company was asked to create an excerpt from the piece which was performed to 250 guests from all over the world, including the World Federation of the Deaf Board.

The company was also proud to be nominated for an award, says Dr Haughey. “And we were honoured to be asked to perform at such a special event. The evening celebrated the 10-year anniversary of NZSL becoming an official language in New Zealand."

The NZSL Awards came at the end of NZSL week, which is held each May. Run by Deaf Aotearoa, the week is designed to celebrate the language and raise awareness of New Zealand’s Deaf community, providing a platform for Deaf people to proudly promote their language and culture.

At The End of My Hands is performed in both NZSL and English and is accessible to both Deaf and hearing audiences. The piece explores Deaf culture and the dramaturgical possibilities that emerge from giving both languages equal status on stage.