The highs and lows of a life observing bookkeepers 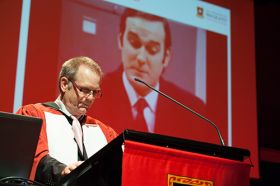 The highs and lows of a life observing bookkeepers

Waikato's Professor of Accounting Grant Samkin reflected on his accidental career choice and outlined some highlights from his two decades of academic research during his Inaugural Professorial Lecture last night.

In a lecture that was both witty and informative – featuring a Monty Python comedy sketch about chartered accountants – Professor Samkin argued that the accounting profession needs to become more open and transparent, and consider the public interest by contributing more to social justice and equity.

“Over the last three decades, the accounting profession has not covered itself in glory,” said Professor Samkin, citing media articles about multinational tax avoidance schemes worth US$1 trillion. “We’ve been the subject of valid criticisms from a number of quarters.”

He spoke about the influential academic-activist Prem Sikka, a professor of accounting who frequently uses the mass media to highlight the profession’s own shortcomings, in an effort to mobilise change.

Professor Samkin also discussed his own research into non-financial narrative reporting by New Zealand organisations; the use of annual reports to not only report on financial performance to shareholders, but also as a public relations tool to respond to media criticism. For example, the Department of Conservation has used its annual reports to respond to the Cave Creek tragedy in 1995, the use of 1080 poison to control pests, and the culling of wild horses in Kaimanawa.

He is currently developing a new accounting framework that will help external stakeholders to measure an organisation’s performance against biodiversity and natural capital targets.

Professor Samkin also introduced the audience to some of the historical ‘hero accountants’ he has researched over the years whose exploits have made an impact. For example, John Pringle, a bookkeeper for the East India Company in the late 18th century who took accounting technology to the Cape of Good Hope. As well as being an accountant, he also worked as a military spy.

Professor Samkin has been a chartered accountant for 26 years and an academic for 17. He lives in Mount Maunganui and lectures at Waikato Management School on the University’s Hamilton campus.

He is a co-author of all six editions of the market-leading textbook New Zealand Financial Accounting.