The Pokémon Go craze: What does it say about society? 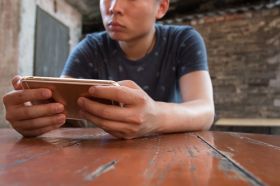 Pervasive games affect people in different ways - some more seriously than others.

For digital gaming experts, the success of Pokémon Go probably came as no surprise. But for the rest of us, we’ve found the appeal of the phenomenon overwhelming – strange even.

So why did people go crazy for Pokémon Go and what does it tell us about the future of gaming and society? University of Waikato Screen and Media Studies Senior Lecturer Dr Gareth Schott has some ideas. He’s an expert in media psychology, media fandom, digital cultures and literacy in the new media age.

Pokémon Go is a location-based, augmented reality game that uses aspects of pervasive gaming. This is a modern form of game design that combines traditional gaming (analogue and digital) with real-life scenarios and environments. In other words, real streets and cities replace game boards and computer screens.

When playing Pokémon Go, players use the GPS capabilities on their mobile device to locate, capture and battle mythical creatures that are mapped onto real-life co-ordinates. The game uses augmented reality to bring the creatures to life by overlaying a virtual world on the real one.

Pervasive gaming blurs the boundary between reality and fiction, breaking the divide between games as temporary worlds and games that become part of your everyday life.

How is pervasive gaming changing society?

Pervasive games affect people in different ways – some more seriously than others. Games such as The Beast or I Love Bees invade players’ email and telecommunications, coaxing them into deep, mysterious thrillers where they have to explore abandoned buildings or attend events in search of clues. These games have been dubbed ‘perversive’ (rather than pervasive) because they transform players’ lives into a game that never fully reveals itself or can’t be easily switched off.

Pokémon Go is relatively tame compared to these, though it has had its fair share of health and safety concerns. Players so deeply absorbed in play have wandered into moving traffic, strayed into landmine zones (Bosnia) and illegally crossed country borders. The game has also raised questions about public privacy and whether it’s appropriate for such games to be played in public spaces such as hospitals, airports, or museums. Washington DC’s Holocaust Museum became a Pokestop for players to collect game items and battle other players. Hollywood film director Oliver Stone has labeled the game ‘surveillance capitalism’ in response to the way the app demands full access to players’ google account information when they register.

Game designer and scholar Eric Zimmerman says games have become a central force in culture. He points to examples such as Wikipedia, where a chaotic community of users are the experts, creating information together to evolve the system as a whole. We’re living in a time centered on systems and system thinking. A time that calls for people who require playful, innovative, trans-disciplinary thinking to be able to analyse, re-design and transform existing systems.

What does the future of pervasive gaming look like?

The gaming industry has always been a trendsetter for new technologies that can be applied in other creative industries. In the wake of Pokémon Go, game developers and other companies are rushing to capitalise on the game's popularity and successful application of augmented reality. Several developers released look-alike apps in places where the game wasn’t available. These topped mobile downloads in those countries.

It's too soon to say if Pokémon Go’s success will reshape the $25 billion mobile gaming industry, but we can certainly expect more applications to adopt the same technologies in their products.

Dr Schott says digital games will continue to stir controversy, but we must remember they’ve been with us far longer as a cultural experience than as a technological product. But if you are thinking about playing Pokémon Go, remember to look both ways before crossing the road.

Interested in the world of gaming and digital technologies? Turn your passion into a career with a degree in Screen and Media or Computer Science at the University of Waikato. Applications are now open for 2017.