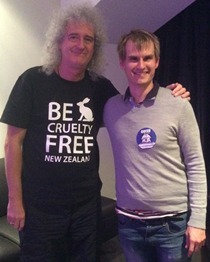 A musical analysis of British rock band Queen’s studio recordings between 1973 and 1980, covering the albums Queen to The Game, is the focus of a recently completed thesis by University of Waikato doctoral student Nick Braae.

Nick set out in his PhD studies to explain Queen’s idiolect, or distinct musical style, as well as how the band developed across their early albums. He also explored some of the musical relationships between Queen and contemporary artists, such as the Beatles, Led Zeppelin and Pink Floyd.

Having long been familiar with Queen’s music, Nick was drawn to the group's rich and intricate songwriting and production style. “It was fascinating to discover how their backing vocal arrangements were constructed, for example, and the idiosyncratic ways in which their songs were structured. Further, it was extremely rewarding to uncover all of the subtle influences on the musicians from such an array of styles."

A highlight of the research was meeting and interviewing Queen guitarist Brian May in September 2014. “He gave many insights into what occurred behind the studio doors, and these provided an invaluable complement to my own analysis. He was also very friendly, polite, and really interested in my work – it was quite surreal!” Nick says.

Nick’s main research finding was that Queen were continually experimental in terms of the form, style and harmonies of their songs, but they also had highly consistent ways of arranging and recording songs.  Many tracks, therefore, struck a fine balance between musical novelty and familiarity. One of the secondary findings concerned the band’s development. He found that they slowly pieced together their style through the early albums, with their biggest hit in 1975 – ‘Bohemian Rhapsody’ – acting as a culmination to this process and a summation of their musical essence.

Chief supervisor Associate Professor Ian Whalley says given the popularity of Queen internationally, it was surprising how little has been written on them from a musical perspective. "Nick's thesis was innovative in its use of traditional musicological techniques to address Queen's work, while also drawing on ideas from contemporary popular music studies. The study has addressed a large gap in the popular music literature, while also developing methodologies that can be applied to other bodies of work.”

Nick is currently working at both the University of Waikato and the Waikato Institute of Technology. He has published a number of articles and essays from his thesis and is currently developing it into a book. In collaboration with Marie Berginiat of Jean Monnet University in France, he has written a guide to Queen’s songs in French – Queen, la discographie, which was released in June 2016.