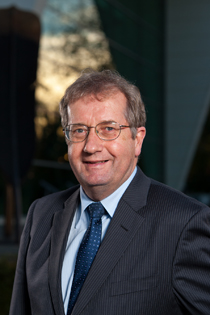 Robert (Roy) James Crawford, engineer and academic leader, was the University of Waikato’s Vice-Chancellor for a decade, completing his term in December 2014.

In the 2015 Queen’s Birthday Honours, he was named a Companion of the New Zealand Order of Merit for services to tertiary education. He was made an Emeritus Professor and awarded an Honorary Doctorate in April this year.

Irish-born, Emeritus Professor Crawford turned down a promising football career to become an academic, completing a BSc, PhD and, a short time later, a DSc at Queen’s University Belfast. He lectured at Queen’s, becoming a professor in 1989. His research focus was mechanical and process engineering; his speciality was polymers, and moulded plastics in particular. His research has resulted in a number of patented techniques for recording temperatures during the moulding process and improving the quality of moulded parts.

He travelled the world to give lectures on his specialist subject and served on numerous committees and associations linked to the plastics industry.  He has published nine books and more than 250 articles and been awarded more than a dozen international prizes and awards for his research. For more than a decade, while also holding down academic positions, Emeritus Professor Crawford was Director of Technical Services for ARM – a leading industry association in the USA. He was elected to their Hall of Fame in 2007, one of only four non-Americans to receive this honour.

During his 10-year tenure, Emeritus Professor Crawford led the evolution of a strategic partnership with Bay of Plenty tertiary institutions, in Tauranga, Rotorua and Whakatane, and guided the early planning for the new campus development in Tauranga, which included securing $30 million of community funding from organisations in the Bay of Plenty.

Emeritus Professor Crawford oversaw almost $100 million of building projects, including the refurbishment of the lake shops area, the Student Centre, the Environmental Research Centre and the new Law and Management building on the Hamilton campus, as well as the Maharaia building in Tauranga. He played a key role in focusing the University on an excellence agenda.

Internationally, the university rose in the QS and THE rankings on Emeritus Professor Crawford’s watch and at the same time he worked to increase alumni outreach and support, hosting numerous alumni events all over the world.

Emeritus Professor Crawford was a past-Chair of Universities New Zealand from 2013-2014.

His funeral is in Auckland on Friday 1 July at 2pm at the Manukau Memorial Gardens Chapel, 361 Puhinui Road, Papatoetoe and Chancellor James Bolger will speak on behalf of the University.

The University will host a memorial service on Wednesday 6 July at 1pm in the Gallagher Academy of Performing Arts.