University of Waikato international partnership first of its kind 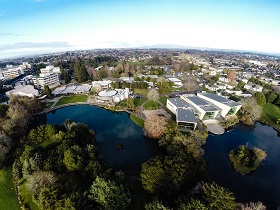 The University of Waikato has become the first New Zealand university approved to teach and award its degrees in China.

The University of Waikato has become the first New Zealand university to be approved to teach and award its degrees in China.

Starting in September 2017, the University of Waikato will establish a joint Institute with Zheijiang University City College (ZUCC) which will allow students to complete their degree studies in China and receive a dual degree from both universities.

ZUCC is an independent college of Zhejiang University – one of the top three universities in China. The University originally partnered with ZUCC in 2002.

Vice-Chancellor Professor Neil Quigley says this is a significant move for the University and complements other joint programmes it has been running in China for the past 20 years.

“The University is committed to growing its off-shore delivery, and transnational education plays an important role in the University’s internationalisation strategy,” he says.

Professor Quigley says the partnership is significant because it’s the first of its kind between a New Zealand and Chinese university.

“We’re the first university in New Zealand to achieve institute status in China, so we’re excited to be able to offer full degree programmes there.

“We’ve been privileged to have a long association with ZUCC, and the establishment of an institute there is a great progression for us.”

The first intake of students will be able to study for degrees in finance, media and creative technologies, and computer graphic design.

“We know there’s a need for these types of programmes in China. The finance degree was a popular choice with students when we began our partnership with ZUCC, and the addition of media and creative technologies and computer graphic design relates well to the location of ZUCC in Hangzhou, which is a hub for technology and creative practices,” says Professor Quigley.

“This is a mutually beneficial partnership where there are clear outcomes for both universities.”