Waikato academic to speak at TEDxScottBase 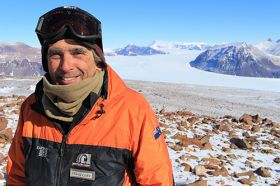 University of Waikato Professor Craig Cary is one of 10 influential people who will speak at TEDxScottBase in January 2017. Professor Cary is a microbial ecologist from the University’s School of Science. He researches bacteria that live in extreme environments, including deep sea thermal vents and the soils of Antarctica.

TEDxScottBase, held at Scott Base, Antarctica, is being held in conjunction with the 60th Anniversary of New Zealand having an official presence in Antarctica and aims to celebrate science and highlight climate change.

Professor Cary says this will be a great opportunity to showcase more than 40 years of Antarctic research that has been conducted by the University of Waikato.

“Our recent work in understanding how the terrestrial Antarctic ecosystem will respond to change will be the primary focus of my talk,” he says.

Antarctica New Zealand Chief Executive Peters Beggs says TEDxScottBase will play a crucial role in raising awareness about climate change and other issues across the world.

“What happens in Antarctica will significantly impact the entire planet and we are delighted this line-up has so much expertise and appeal. Whether you’re interested in space, music, oceans, film, sustainability, photography, history, exploration or business, TEDxScottBase has something to offer.”

Only those who are already in the international territory of Antarctica undertaking or supporting scientific research missions will be able to attend the live event on 15 January 2017.  TEDxScottBase will be broadcast to the world on 22 January.