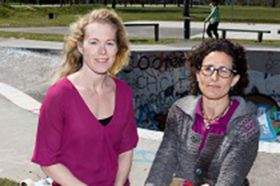 Skateboarding will feature at the 2020 Olympics, thanks in part to two Waikato University researchers, Associate Professors Holly Thorpe and Belinda Wheaton.

The International Olympic Committee (IOC) has decided to include five new sports at the Tokyo 2020 Olympics.

Meeting in Rio, the IOC has given the nod to baseball/softball, karate, skateboard, sports climbing and surfing, and two University of Waikato researchers will be able to take some of the credit for the IOC decision.

In 2015, University of Waikato Associate Professors Belinda Wheaton and Holly Thorpe won a grant from the world's most powerful sporting organization, the IOC, to study 'Youth perceptions of the Olympic Games: Attitudes towards action sports at the Youth Olympic Games and Olympic Games' and their final report played an important role in informing the latest decision to include skateboarding, surfing and sport-climbing into the Tokyo 2020 Summer Olympic Games, with Dr Thorpe presenting their findings to the Olympic Programme Commission in Lausanne earlier this year.

Their report identified the challenge the IOC faces to stay relevant to contemporary youth amid changing sport participation and consumption patterns and growing competition from mega-events such as the X Games.

Dr Thorpe says their project critically examined youth perceptions of the relevance and significance of the Olympic Games, and the Youth Olympic Games. “It focused particularly on the attitudes of participants in newer, youth-focused action sports, such as skateboarding, surfing, BMX, snowboarding, parkour, kite-surfing, as well as the cultural processes leading up to and following the short-listing of surfing, skateboarding and sport climbing for the Tokyo 2020.”

The project included online surveys in nine languages attracting responses across 51 countries, as well as extensive media analysis and interviews with 25 key individuals in the global action sports industries and those directly involved in the processes, including federation members, presidents, athletes, coaches, agents, event organizers and journalists.

Dr Wheaton says combined, the three survey methods provided rich insights into the experiences, attitudes, opinions, debates and politics that influence youths’ current and future participation in, and consumption of, the Olympic Games.

“Our project revealed generational differences in attitudes towards action sports’ inclusion in the Olympic Games, as well as changing perceptions among those working most closely with the IOC to prepare their sports for possible Olympic inclusion.

“Furthermore, our report highlights the power and potential of action sports’ inclusion into the Olympic Games and Youth Olympic Games, as well as some of the ongoing and new challenges for such significant changes to both the infrastructure of action sports cultures and industries, and to the transforming landscape of Olympic sport,” Dr Wheaton says.

The change is the most comprehensive evolution of the Olympic programme in modern history.

As Dr Thorpe says, “It's been pretty cool to be part of this 'evolution'."

Drs Thorpe and Wheaton will talk about their Olympic research at a seminar on campus next month.