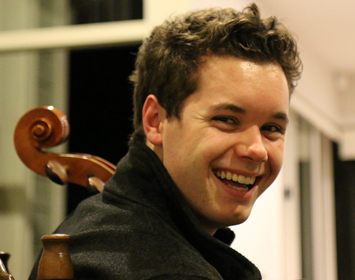 Cello student Sam Lucas has taken out the top spot at the 2016 National Concerto Competition.

This is the fourth consecutive time a University of Waikato cello student has placed first in the national competition.

The competition enters its 50th year this year. It is the renowned concerto competition in New Zealand, with the top monetary prize sought after by music students throughout the country. Many of the winners have gone on to have strong musical careers both in New Zealand and overseas.

University of Waikato students who have taken out the top spots in previous years include, cellist Mattheus Balzat (1st) and clarinetist Nathaniel Smorti (3rd) in 2014, pianist Andrew Leathwick (1st) in 2013, cellist Santiago Canon Valencia (1st) in 2012 and cellist Edward King (1st) in 2010. There was no competition held in 2011.

“Waikato’s Conservatorium of Music students have won five out of the past six National Concerto Competitions – the most highly contended competition in New Zealand. It bears clear witness to the outstanding level of teaching of Waikato's cellist and cello lecturer James Tennant. We are extremely proud of Sam’s achievement,” says Conservatorium of Music’s programme convenor Dr Mike Williams.

Mr Lucas is currently in his third year of studying a Bachelor of Music at the University of Waikato.