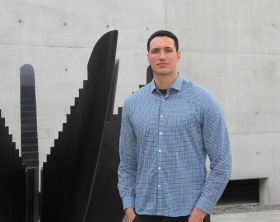 For the fifth year in a row, a Waikato University law student has won the national Kaupapa Māori Moot competition.

Zac Katene (Ngāti Toa, Ngāti Tuwharetoa) competed against students from the five other New Zealand university law faculties ‒ all of them required to interpret the Treaty of Waitangi Act 1975 in the context of the Waitangi Tribunal’s powers to make binding recommendations for the return of Crown-owned forest land where a claim has been held to be well-founded.

Thankfully, the subject and the issue of the moot were the same through all rounds of the competition, Zac says. “So the preliminary and final rounds at Waikato were the best preparation. Competing with some of the amazing Waikato students helped me refine my arguments and gain a greater grasp of the key issues. Also, knowing that the judges wouldn't hold back in their questioning led me to do a lot of background reading.”

Zac says the real challenge “was standing up to the judges and knowing your argument well enough that you could deliver it under pressure and from different angles”. And he found he enjoyed standing up and speaking in front of a panel of judges.

“That’s the whole reason why I participated in the competitions this year. It was all about discovery, and finding out whether I enjoyed the clinical elements of being a lawyer. I’ve also learnt from competitions like this one that we have some incredibly talented young people who are motivated and champions in their own right.”

From a purely practical perspective, the competition brought home to Zac just how vital preparation is.  “Being put under pressure by the judges and knowing how to answer their questions really made me grateful for the hours I spent on the train, in the airport, at home and at uni studying the case inside out.”

It’s quite an honour for Zac to be the fifth Waikato law student to win the annual Kaupapa Māori Moot. He puts the Waikato students’ ongoing success down to the supportive environment at Te Piringa Faculty of Law. “Māori students are encouraged to put their hands up and give things a go and the lecturers give us great support. And I genuinely believe Waikato and its surrounding areas, like Rotorua and Tauranga, produce great Māori individuals who want to make a difference, and they feel welcome at our university.  Of course knowing who’s won the competition before you is great incentive – it shows you that winning is possible, it puts it in reach.”

Zac also took first place in this year’s Australasian Negotiation Competition and is currently working as a summer intern at Simpson Grierson in Auckland. He’s due to complete his Bachelor of Management Studies and Bachelor of Laws degrees in June next year.

“I would love to do a masters in law at some point, but immediately after graduating I’m really keen to pick up a good graduate position somewhere and become acquainted with real-life legal practice.”