Scientists, sediment and mangroves in the Mekong Delta

Changes in Vietnam’s Mekong Delta are highlighted in the latest issue of Oceanography which features research being done by University of Waikato scientists.

Dr Julia Mullarney and Associate Professor Karin Bryan are part of an international team that has been researching the tropical delta that covers more than 40,000 square kilometres in southern Vietnam. They pair have been working with scientists from the USA, Netherlands, New Zealand and Vietnam, supported by the US Office of Naval Research.

The September 2017 issue of Oceanography focuses solely on the Delta, and Drs Mullarney and Bryan have contributed to four of the nine articles.https://tos.org/oceanography/issue/volume-30-issue-03

Dr Mullarney is a co-editor of the journal and has been a regular traveller to the region to measure the impact of sediment on land and sea, looking at such things as tidal impacts on sediment from “source to sink”, turbulence and seabed morphology in mangrove forests, and the decreased sediment supply and sea-level rise. 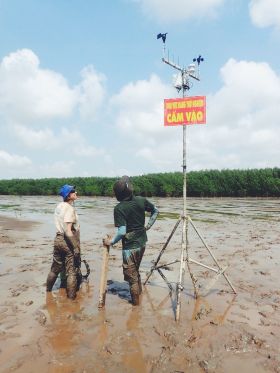 The Mekong is so low-lying, that even small changes to sediment supply can have big consequences, says Dr Bryan. “So what we’re doing helps us understand what controls the expansion or shrinking of the delta as a whole. We want to be able to predict the future and come up with solutions for the Mekong Delta and others like it, especially regions threatened by climate change and rising sea levels.”

Dr Mullarney has travelled and researched extensively in the delta. With technical officer Dean Sandwell and PhD student Benjamin Norris, she’s lived on a riverboat in the delta, using it as a base for work in the mangroves.  “We’ve been in mangrove forests up to 20 metres high.

"We’ve confronted snakes and wasps and there’s always a whole lot of mud.”

She says researching the area often requires them to think outside the box, as much of the gear they use is intended for lab use rather than in the field, or in this case, the mangrove swamps.

“We’ve used Vietnamese fishing boats, kayaks and tree huts as platforms to power and run instruments, which allows us to monitor currents in real-time at high frequencies – greater than 50 times a second,” Dr Mullarney says.

Dr Bryan, a sediment specialist, works mostly in the lab at the University of Waikato. She examines the data collected and works on developing numerical models which are used to predict the water and sediment movement, and ultimately the changes to seabed elevation in the mangroves, work which directly feeds into the international team effort.

Dr Bryan is a finalist in this year’s KuDos Awards acknowledging scientific achievements by Waikato scientists, and she is also the lead on the MBIE-funded surf-break research project, developing management guidelines for surf-breaks of national and regional significance.

Scientists, sediment and mangroves in the Mekong Delta is licensed under a Creative Commons Attribution 4.0 International License.