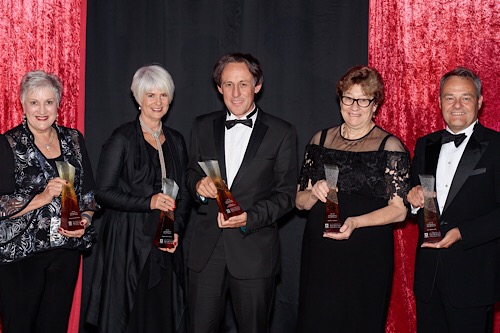 Distinguished Alumni with their awards.

The University of Waikato’s latest Distinguished Alumni Award recipients have taken the floor, in a series of public lectures and talks in the run-up to the award ceremony itself.

Feminist and clinical psychologist Dr Sarah Calvert gave an overview of the rise of feminism in New Zealand, particularly the second wave of feminism in the latter half of the 20th century, in which she played a part. She summarised its successes and the ongoing challenges women still face for equality in many aspects of their lives, in many parts of the world.

In 1979, more than 3000 women gathered at the University of Waikato for the fourth United Women’s Convention and developed a seminal set of beliefs that covered such things as control of your own body; abortion as a woman’s right to choose; freely available 24-hour childcare as a right; abolition of sexual stereotypes across society; fostering non-hierarchical institutions; recognising that all forms of sexual preference are valid; and fostering the right of women to work for equal pay and with equal opportunity. “It was brave and contentious at the time,” she said.

But Dr Calvert also said feminism has not been able to grapple with the complexity of how we can live as fully human beings in appropriate, respectful and self-enhancing ways. “Until we begin that project then I think all of our other projects will ultimately continue to fail as well.

“If feminism is to genuinely create lasting change about even one of the first issues we sought to address, then clearly we need to think about the structures we use to challenge power and authority, the way we organise, how we treat each other, and whether we seek to work radically or through reform.”

Dame Annette King regaled her audience with an overview of her extensive political career. It began in Hamilton when she was working as a dental nurse and was pursuing her BA at Waikato. In her spare time during 1972 she joined the Hillcrest branch of the Labour Party, and started to campaign for a pay rise for her sector, even taking to the streets of Wellington in protest. From humble beginnings in Waikato, her career spanned several decades, and she became the country’s longest serving female MP.  Her time now is devoted a range of leadership roles, including as a Director of Watercare Services, the country’s biggest water utility, supplying all of Auckland. Dame Annette identifies water as one of the key issues for the future, and sees her role with the organisation as part of continuing service to the community.

A number of old friends, and political party colleagues joined Dame Annette for her public talk. She also fielded some engaging questions ranging from politics and the impact of social media, to whether civics should be taught in schools.  She received her Distinguished Alumni Award for her commitment to health and social justice in New Zealand while a Member of Parliament.

Distinguished Alumni recipient Jan Zijderveld, CEO of global cosmetics company Avon, pulled no punches at his lunchtime business talk. He says commerce is evolving exponentially, and it’s easy to get left behind. “You’re either leading or you’re losing. Just look at Kodak, Nokia or Blackberry.”

Technology has put the customer in control. “If you want to stay competitive you need to know how to ‘delight’ your customers. If you don’t, someone else will.” He says the influence of China is also changing the face of global business. “They’ve always been able to do it cheaper, but now they can also do it better.”

But Mr Zijderveld is optimistic. “You can’t see the future as a threat.” He says people in business need insight, big ideas and the drive to make them happen. “Computers still can’t replace good ideas!”

Jan has had what he calls ‘an international life’. The Dutch-born Kiwi graduated in 1987 with a Bachelor of Management Studies and spent the majority of his career with multinational giant Unilever in Singapore, Italy, Stockholm and London. Always on the hunt for a new challenge, he recently took the top job at Avon, which was in decline. “There are six million women who rely on Avon, so I wasn’t about to let it die.” And Jan Zijderveld has big plans of his own. “I want Avon to become the digital beauty company.”

Oxford-based Professor Tom Higham is a world leader in the field of radiocarbon dating and archaeological science and next month takes over as Director of the Oxford Radiocarbon Accelerator Unit. His lab is arguably the best place in the world for dating archaeological samples spanning back to 50,000 years.

In his lecture he outlined the process of carbon dating and the opportunities it provides to uncover the past, its relevance in the modern world and some of the more fun aspects of his job. He’s dated Sir David Attenborough’s elephant bird’s egg from Madagascar, the skeleton used for artist Damien Hurst’s £28 million diamond-studded work For the Love of God, and he’s had occasion to prove that “expensive” 100-year-old scotch is little more than a few years old.

The professor says as glaciers melt more bodies are being found, similar to the discovery in Italy of Ötzi the Ice Man, the best naturally preserved mummy that’s ever been found. “Radiocarbon dating done in our labs suggested he died 5,500 years ago. And of course there’s been a huge amount of science done, his entire genome has been sequenced, we know his stomach contents…this poor guy has been investigated so much in the name of science, but the date was the key thing.”

Professor Higham likens his work to a detective story – starting with a puzzle or mystery and using forensic techniques to solve it.

Queen’s Counsel Miriam Dean CNZM started her stellar career as a lawyer with a Bachelor of Social Sciences from Waikato in 1977. Her public lecture, ‘Leading Your Career: What do women need to achieve success?’ drew a big crowd. She joked there were a couple of brave men at a talk unashamedly for women, before going on to give an outline of her career progression, and a range of very practical advice for other women to act on.

Ms Dean was the first woman partner at law firm Russell McVeagh, in 140 years. She is very proud of the achievement. “I did some fantastic work there, and it is a very good law firm. But I did realise the culture was not mine, and that I was a square peg in a round hole.” It was a time when she was very much a woman in a man’s world, often the only woman at client functions, and the only woman in court. “It was really stressful”. She nearly gave up law, but with the help of two mentors, who were men, she stayed and moved to the independent bar. Ms Dean then went on to directorships and other leadership positions, and what she identifies as a career highlight – chairing the Government Inquiry into the WPC incident (the Fonterra botulism scare).

Key pointers during her lecture were the importance of taking risks, and taking up every opportunity you are given, as well as being yourself – authenticity is key. “And don’t be put off by working in a field where you don’t know what you don’t know. It can be one of the most rewarding challenges you take up.”

The Chancellor and Vice-Chancellor presented the awards to each of the recipients at a dinner event during the evening. The acceptance speeches were full of appreciation for the University, teaching staff and the family and friends that supported the awardees in their studies and careers, many of whom were in attendance at both the day events and the ceremony itself.

Earlier this year Dr Shane Legg was presented with a Distinguished Alumni Award for his outstanding achievements in AI research and his success in the international IT industry. He is the Co-founder and Chief Scientist at Google DeepMind. 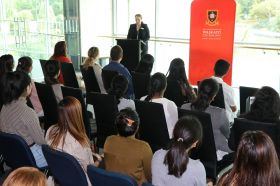 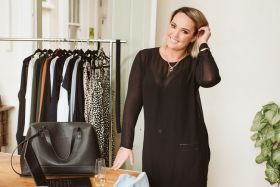 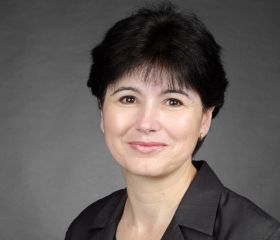